Léonard Tsuguharu Foujita (藤田 嗣治 Fujita Tsuguharu, November 27, 1886 – January 29, 1968) was a Japanese–French painter and printmaker born in Tokyo, Japan, who applied Japanese ink techniques to Western style paintings. He has been called “the most important Japanese artist working in the West during the 20th century”. His Book of Cats, published in New York by Covici Friede, 1930, with 20 etched plate drawings by Foujita, is one of the top 500 (in price) rare books ever sold, and is ranked by rare book dealers as “the most popular and desirable book on cats ever published”.

Immediately after graduating secondary school, Foujita wished to study in France, but on the advice of Mori Ōgai (his father’s senpai military physician) he decided to study western art in Japan first.

In 1910, when he was twenty-four years old Foujita graduated from what is now the Tokyo National University of Fine Arts and Music. His paintings during the period before he moved to France were often signed “Fujita”, rather than the francized “Foujita” which he later adopted.

Foujita’s first marriage was to Tomiko Tokita (鴇田登美子 Tokita Tomiko, also called Tomi Tokita), a school teacher in a girls’ school in Chiba Prefecture. They were married in 1912, the year before Foujita left for Paris. They divorced in 1916.

In March 1917 in the Café de la Rotonde, Foujita meet a young lady by the name of Fernande Barrey. At first, she totally ignored Foujita’s efforts to engage her in conversation. However, early the next morning, Foujita showed up at Fernande’s place with a blue corsage he had made overnight. Intrigued, she offered him a pot of tea and they were married 13 days later.

Within a few years, particularly after his 1918 exposition, he achieved great fame as a painter of beautiful women and cats in a very original technique. He is one of the few Montparnasse artists who made a great deal of money in his early years. By 1925, Tsuguharu Foujita had received the Belgian Order of Leopold and the French government awarded him the Legion of Honor.

In 1918, a trip to the south of France was organized by the Polish poet Léopold Zborowski, who had the idea that his artist-friends could sell pictures there to rich tourists. Foujita and his wife went along as did Soutine, Modigliani with his lover, Jeanne Hébuterne. The trip was not, however, a success and the group had to survive on the advances that Foujita had obtained from his Paris dealer. By the time the final reckoning arrived even those funds had run out, and their landlord, ignoring the offers of pieces of art, confiscated all their baggage in lieu of payment.

In 1921, he became involved with Lucie Badoul, whom he called Oyuki, or “Rose Snow”. She would become his third wife. The relationship ended when she became the lover, then the wife of the surrealist poet Robert Desnos.

Three years later he went to Montparnasse in Paris, France. When he arrived there, knowing nobody, he met Amedeo Modigliani, Pascin, Chaim Soutine, and Fernand Léger and became friends with Juan Gris, Pablo Picasso and Henri Matisse. Foujita claimed in his memoir that he met Picasso less than a week after his arrival, but a recent biographer, relying on letters Foujita sent to his first wife in Japan, clearly shows that it was several months until he met Picasso. He also took dance lessons from the legendary Isadora Duncan.

Foujita had his first studio at no. 5 rue Delambre in Montparnasse where he became the envy of everyone when he eventually made enough money to install a bathtub with hot running water. Many models came over to Foujita’s place to enjoy this luxury, among them Man Ray’s very liberated lover, Kiki, who boldly posed for Foujita in the nude in the outdoor courtyard. Another portrait of Kiki titled “Reclining Nude with Toile de Jouy,” shows her lying naked against an ivory-white background. It was the sensation of Paris at the Salon d’Automne in 1922, selling for more than 8,000 francs. In 2013, the painting sold at Christie’s in New York for $1,205,000.

His life in Montparnasse is documented in several of his works, including the etching A la Rotonde or Café de la Rotonde of 1925/7, part of the Tableaux de Paris series published in 1929.

After the breakup of his third marriage, and his flight to Brazil in 1931 (with his new love, Mady), Foujita traveled and painted all over Latin America, giving hugely successful exhibitions along the way. In Buenos Aires, Argentina, 60,000 people attended his exhibition, and more than 10,000 queued up for his autograph. In 1932 he contributed a work to the Pax Mundi, a large folio book produced by the League of Nations calling for a prolonged world peace. However, by 1933 he was welcomed back as a minor celebrity to Japan where he stayed and became a noted producer of militaristic propaganda during the war. For example, in 1938 the Imperial Navy Information Office supported his visit to China as an official war artist.

Foujita left Japan after the war. Today, his works can be found in the Bridgestone Museum of Art and in the Museum of Contemporary Art in Tokyo, and more than 100 in the Hirano Masakichi Art Museum in Akita. 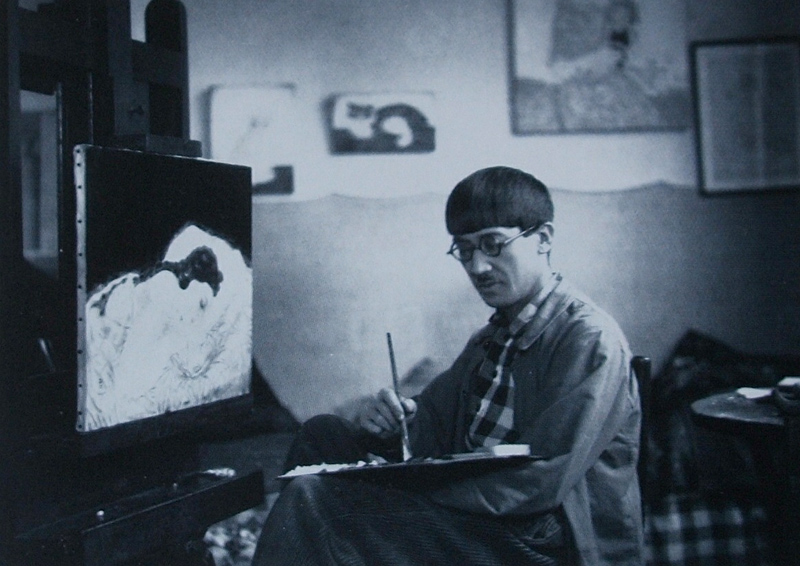 On his return to France, Foujita converted to Catholicism. He was baptised in Reims Cathedral on 14 October 1959, with René Lalou (the head of the Mumm champagne house) as his godfather and Françoise Taittinger as his godmother. This is reflected in his last major work,at the age of 80, the design, building and decoration of the Foujita Chapel in the gardens of the Mumm champagne house in Reims, France, which he completed in 1966, not long before his death.

Tsuguharu Foujita died of cancer on January 29, 1968, in Zürich, Switzerland and was interred in the Cimetière de Villiers-le-Bâcle, Essonne département, France. In 2003, his coffin was reinterred at the Foujita Chapel under the flagstones in the position he originally intended when constructing the chapel.