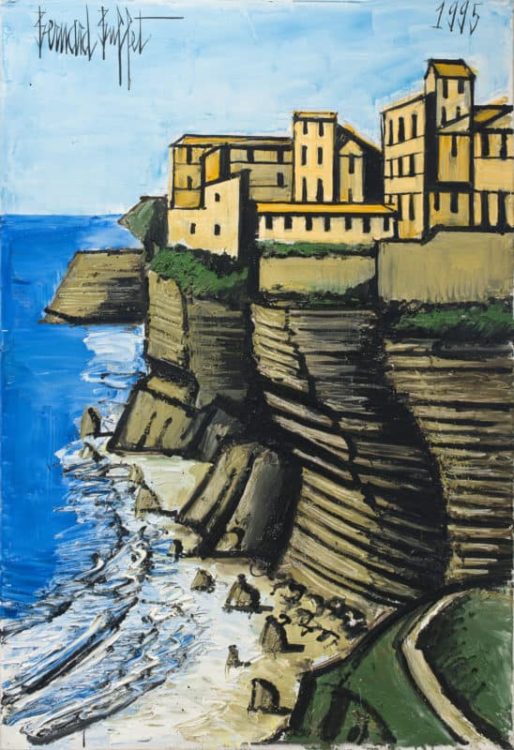 Bernard Buffet, who was highly cultivated in art and had a phenomenal visual memory, very often referred to the grand genres of classical painting in his works. With l’Entrée de Bonifacio Bernard Buffet takes over the landscape genre.

This steep cliff facing the sea allowed him to pay tribute to one of his favorite painters: Gustave Courbet (1819-1877). Bernard Buffet composed his artworks from memory and not directly from nature. For his landscapes and architectural views, he also referred to his large collection of postcards. He drew on them for inspiration for his real and imaginary depictions, which were always painted in the secrecy of his studio.
This way of using photographs as models brought him even closer to Gustave Courbet. It is known that this leader of Realism was inspired by Gustave Le Gray’s (1820-1884) photographs for his landscapes.

Bernard Buffet’s landscapes are characterized by a lack of figures. Whether they are streets or beaches, places are devoid of any human presence. From very early on, Buffet had a habit of showing his views without any human movement, probably as a souvenir of his adolescence spent in Occupied Paris under curfew.