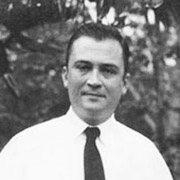 Born in Manila in 1924 and son of a Spanish businessman, Fernando Zóbel de Ayala studied medicine in the Philippines and Philosophy and Letters at Harvard University.

He became interested in painting in the early 1940s. In the 1950s, he continued to paint and returned to Manila to take care of family affairs. This is a time he travels extensively, particularly to the United States and Europe. During a stay in Spain in 1955, he befriended the abstract artists of the time.

Zóbel is best known for its first series of works of art called Les saetas. Named after the liturgical song sung during Holy Week in Spain, they were developed for the most part in the Philippines. Zóbel was confronted with the technical problem of drawing the lines that his theme called, lines which, according to his own words, were “long, thin and controlled”. The artist’s use of a surgical syringe to eject fine lines of paint was a feature of this series. After the saetas, Zóbel begins a series entitled Negra Series or Black Series influenced by Chinese calligraphy. The Negra Series was launched in Madrid in 1959 and continued for four years.

He founded the Spanish Abstract Art Museum at Casa Colgadas in Cuenca, Spain in 1963, with his friends Gustavo Torner and Gerardo Rueda arranged in the famous suspended houses of the city, with the works that Zóbel had collected in his collection. The museum was expanded in 1978 and in 1980, Zóbel donated its collection to the Fundación Juan March, which then integrated it into its own collection. Zóbel was a mentor and collector who contributed to the career of Spanish modernist painters, including Antonio Lorenzo, Eusebio Sempere, Martín Chirino López, Antonio Saura and many others.

After suffering a stroke that left him slightly weakened, he created a series entitled “Las orillas” which developed the theme of rivers.

In 1961 he settled definitively in Madrid.

He died in Rome in 1984 from a heart attack, he was buried in Cuenca.