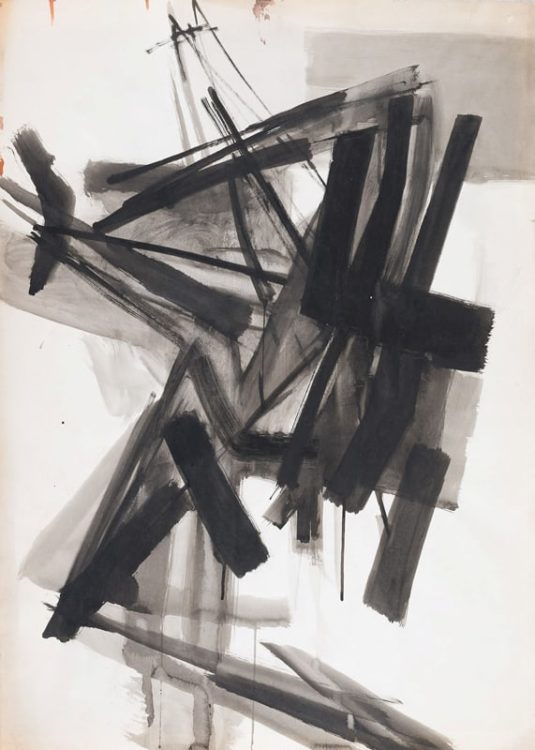 After a “post-cubist” period, the work of Huguette Arthur Bertrand evolved in the mid-1950s towards a more graphic abstraction, punctuated by decided hatchings. The 1959 ink on paper presented here perfectly illustrates this period. On a white background, the artist applies straight lines with more or less diluted black ink. This work by Huguette Arthur Bertrand created vertically shows some ink leaks deliberately left by the artist. Randomness thus takes part in the composition.

The plastic means’ simplicity gives a great expressive force to this work. The contrast between the shape and the background highlights the spontaneous gesture of the painter Huguette Arthur Bertrand. This importance of movement in the artwork’s construction is perfectly legible on a medium left raw, recalling the work of Hans Hartung during the same period. Close to the art critic Michel Ragon, Huguette Arthur Bertrand meets his circle of friends: Hans Hartung but also Pierre Soulages, Gérard Schneider, Zao Wou-Ki, Victor Vasarely… Together, these artists contributed to the portfolio La Peau des choses, an ensemble of prints published in limited edition by Jean-Robert Arnaud in 1968, in honour of Michel Ragon.