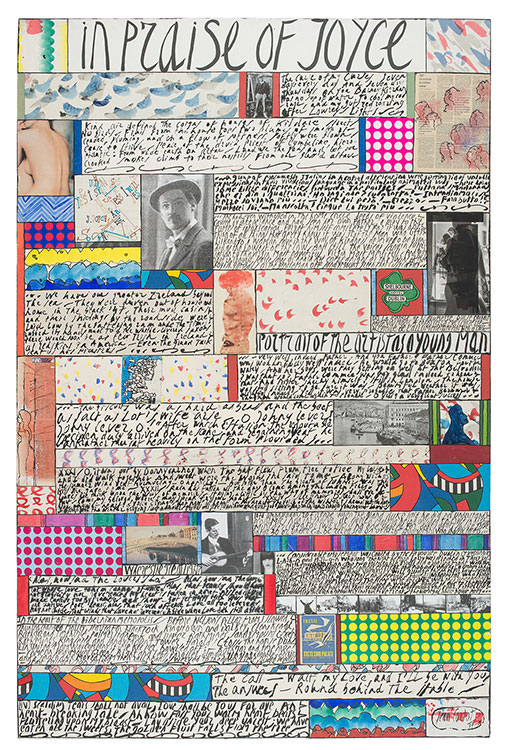 The curse of my curses
Seven times every day
And seven dry Thursdays
On you, Barney Biernan
Has no sup of water
To cool my courage
And my guts red roaring After Buckley’s lights.

Kind air defined the coigns of houses in Kildare street. No birds. Frail from the housetops two plumes of smoke ascended, pluming, and in a flaw of softness softly were blown. Cease to strive. Peace of the druid priests of Cymbeline, hierophantic: from wide earth an altar. Laud we the gods and let our crooked smokes climb to their nostrils from our bless’d altars.

A group of presumably Italians in heated altercation were getting rid of voluble expressions in their vivacious language in a particularly animated way, there being some little differecen between the parties. – Putana madonna, che ci dia i quattrini ! Ho ragione ? Culo rotto ! Intendiamoci. Mezzo sovrano più… Dice lui, pero.- Farabutto ! Mortacci sui !

she had even witnessed in the home circle deeds of violence caused by intemperance and had seen her own father, a prey to the fumes of intoxication, forget himself completely for if there was one thing of all things that Gerty knew it was the man who lifts his hand to a woman save in the way of kindness deserves to be branded as the lowest of the low. And still the voices sang in supplication to the Virgin most powerful, Virgin mots merciful. And Gerty, rapt in thought, scarce saw or heard her companions or the twins at their boyish gambols of the gentleman off Sandymount green that Cissy Caffrey

We have our greater Ireland beyond the sea. They were driven out of house and home in the black 47. Their mudcabins and their shielings by the roadside ware laid low by the batteringram and the Times rubbed its hands and told the whitelivered Saxons there would soon be as few Irish in Ireland as redskins in America. Even the Grand Turk sent us piastres.

Portrait of the artist as a young man

Considerable amusement was caused by the favourite Dublin streetsingers L-n-h-n and M-ll-g-n who sang The Night before Larry was stretched in their usual mirth-provoking fashion. Our two inimitable drolls did a roaring trade with their broadsheets among lovers of the comedy element and nobody who has a corner in his heart for real Irish fun without vulgarity will grudge them their hardearned pennies. The children of the Mane and Female Foundling Hospital