Jean Cortot
Writing and drawing are essentially the same [1] 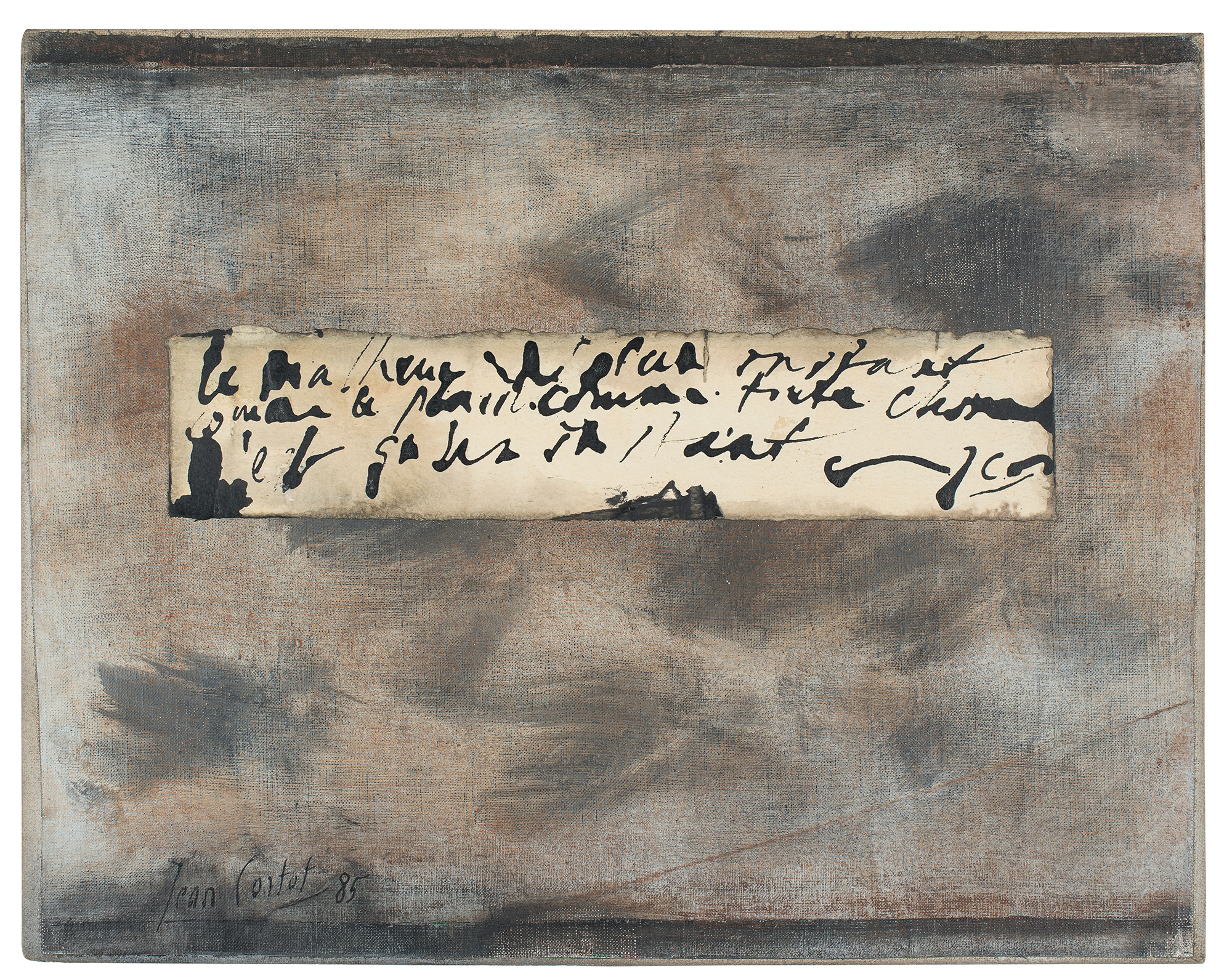 The artist painter Jean Cortot constructed his work based on the symbiosis between painting and writing. Passionate about literature, he described himself as a “predator of texts”. Cortot was born in 1925 in Alexandria, his birthplace providing an early foreshadowing of a life among books.

In 1942, the painter Jean Cortot entered the Académie de la Grande Chaumière, where he founded the Échelle group with the painters Geneviève Asse, Jacques Busse, Jean-Marie Calmettes, Ernest-René Collot, Daniel Dalmbert, Christiane Laran and Michel Patrix, as well as the sculptor Jacques Dufresne. The name of the group—which translates as ‘ladder’ or ‘scale’—was inspired by the artists’ shared studio, from which they could climb a ladder to access the rooftops of Paris. At the end of the Second World War, the artist moved to a studio in Montparnasse, where he would work throughout his career.

In 1948, the painter Jean Cortot was awarded the Galerie Drouant- David’s Prix de la Jeune Peinture for an urban composition, winning the prize against competition from the artist Bernard Buffet. Created in 1946, the prize was awarded each year to an artist under 30 years of age. The jury was composed of painters and art critics. Cortot became a leading figure in the figurative painting movement, painting landscapes of the French Ardèche region and the Mediterranean town of La Ciotat, as well as still lifes, portraits, and other subjects. 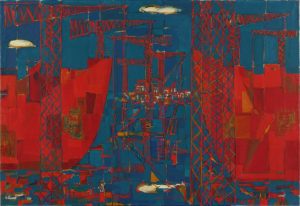 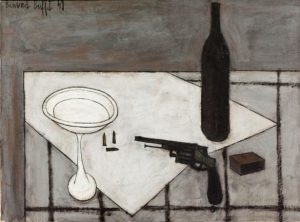 The artist painter Jean Cortot’s already geometric style became increasingly abstract, marked by graphic, broken-up forms. The line became the subject of his works. In 1952, Jean Cortot accompanied his father Alfred Cortot, a famous pianist, on a tour of Japan. The trip left a deep impression on the artist and inspired him in the creation of his imaginary ideograms. The Correspondances series, which the artist began work on in 1959, signalled the important role that writing would play in his subsequent work. Symbols and characters fascinated the artist, who integrated them into his artistic language, creating an indecipherable, imaginary alphabet. It was the gestural aspect of writing that interested the artist. Jean Cortot was interested in Surrealism and the movement’s collages of words and exquisite corpses. The artist was also familiar with the poem-paintings of Paul Klee. 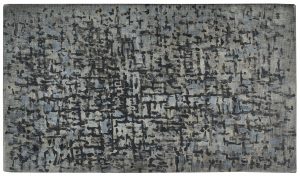 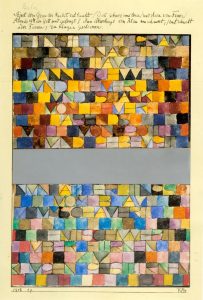 In 1967, the painter Jean Cortot began work on the series Écritures, which he described as a seismograph: a recording of feelings and impressions. The characters in his works were as fantastical and mysterious as ever. The Spanish writer Jorge Semprún stated that: “Jean Cortot had shown us some of the Écritures that he was soon going to exhibit (…) this incomprehensible but obvious language, carrying within it the limpid mastery of a communicable meaning, but whose transcription would have been, perhaps temporarily, rendered impossible, because one would have lost the keys, the alphabet, the syntax of these writings, crying and opaque, transparent and obscure, heartrending like the traces of an I love you on a steamed-up window pane. [2]” 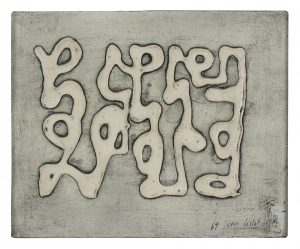 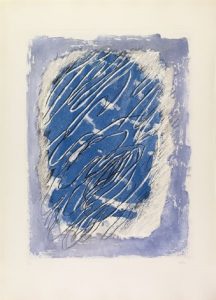 The letters in Jean Cortot’s works became legible starting in 1974, as the artist took texts directly from literature to construct his paintings. He turned to his contemporaries and became friends with the writers Raymond Queneau, Jean Tardieu, Henri Michaux and Michel Butor, composing paintings in homage to his favourite authors. The painter Jean Cortot invited the spectator-reader to contemplate and decipher his works, which were made to be appreciated over time.
In 1978, Cortot began his Onomagrammes series in which he shattered sentences and words. Letters assumed their independence as the atoms of language—a common source for all writers, they evoked possible future creations. 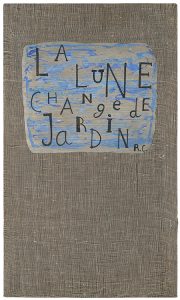 “Anyone who knows L’Isle-sur-la-Sorgue immediately knows, on looking at La Lune change de jardin, that this painting refers to René Char. Blue on a background of saturated blue, with a touch of indigo, the words floating without a fixed line, unstable, fleeing. Or, as they emerge from a fluvial background, they are like the shadows of light fish that are returning to the depths of the bed. This unstable nature of the letters can also represent the instability of the night sky or reason. This sense of disequilibrium in Jean Cortot’s work – mixed upper and lower case letters, various typographies, no apparent plan, disorder or hypertrophy of the central N – is also the imbalance of a thought without a master, left to itself, to its inherent folly. [3]”

The artist painter Jean Cortot drew inspiration from two main sources: poetry and philosophy. One appeals to the imagination, while the other structures thought; together, they gave birth to an individual voice, both sensory and cerebral. Cortot’s paintings are therefore intellectual, while also underlining the irrational nature of human beings. His work is not a discourse on art, but a personal response to painting in the midst of its revival. 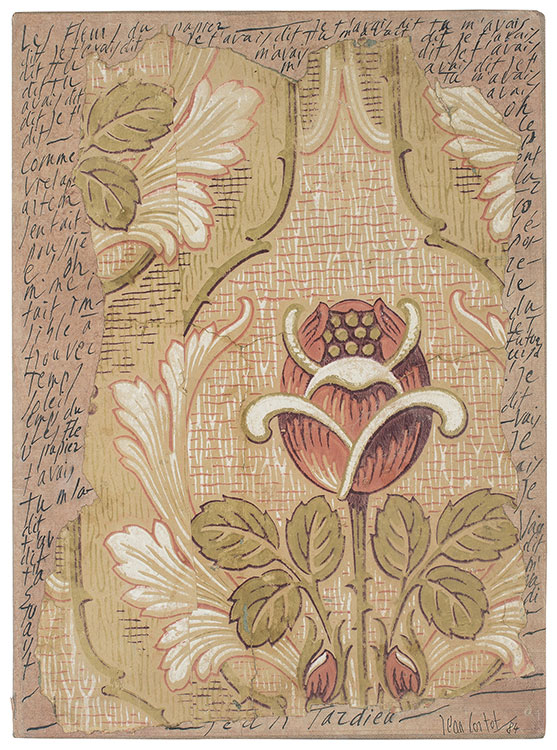 Art Gallery Diane de Polignac » The Newsletters » Newsletter Art comes to you NO. 20 ﻿﻿Jean Cortot Writing and drawing are essentially the same