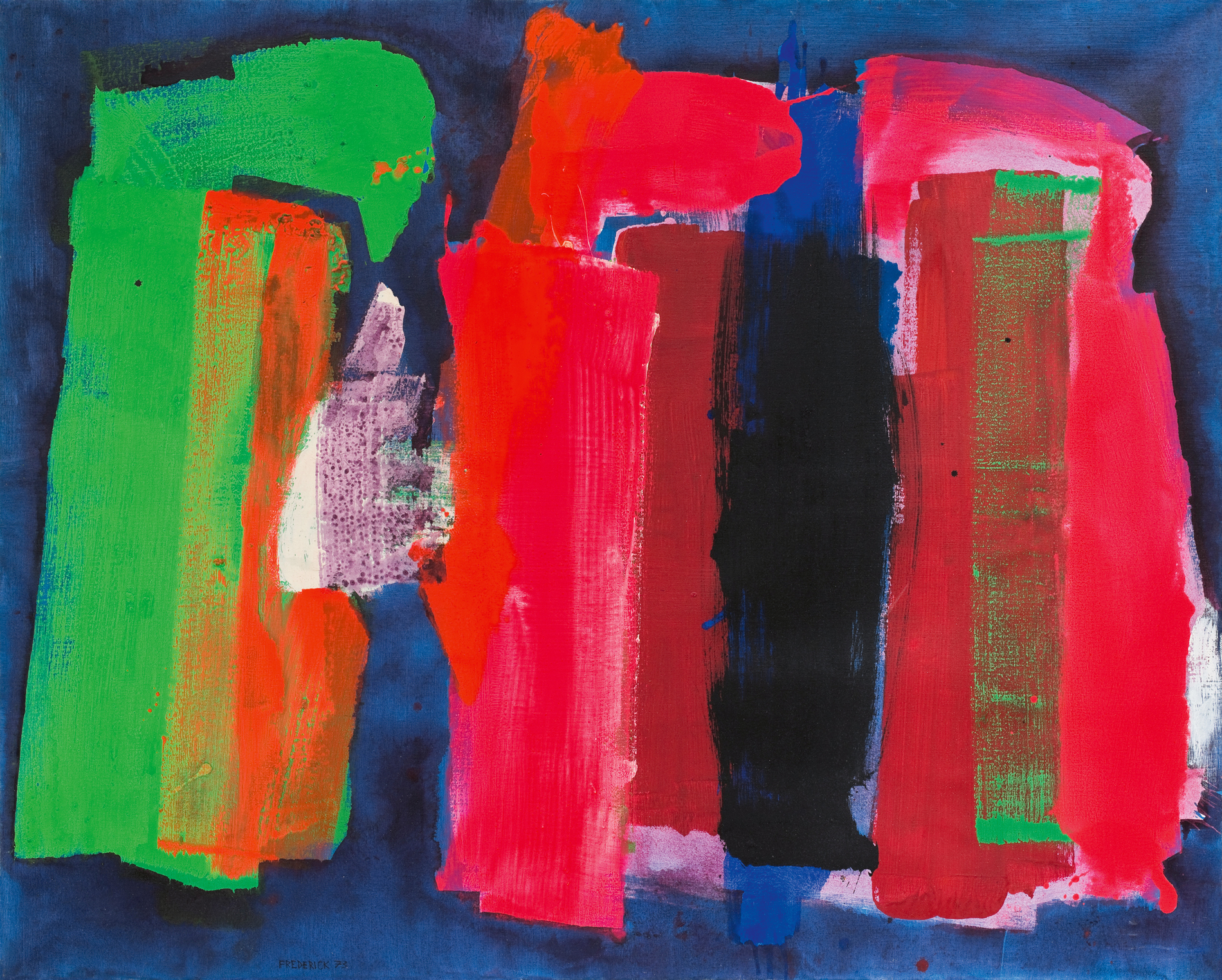 An American painter, Loïs Frederick was born and grew up in Nebraska. Her works are imbued with the immensity of the Great Planes region and its contrasting climates. After studying Fine Arts at the University of Nebraska and then at the Kansas City Art Institute, the painter Loïs Frederick arrived in Paris in 1953 received a Fulbright Award: a fellowship that she even won twice! Immersed in the effervescence of Post War Abstraction in Paris, she always remained a profoundly American artist of Colorfield Painting. The painting from 1973 presented here is a perfect example of her art.

From Henri Matisse to Mark Rothko, the Obsession of Colour

Nothing destined her to be a painter and yet from the start, the artist Loïs Frederick had a feeling for colour. She naturally began to paint by mixing palettes audaciously. Two
aesthetic experiences marked stages in the development of her sensitivity. First, Henri Matisse whose art she probably admired at the retrospective at the Art Institute of Chicago in 1952. From Fauvism to his paper cutouts, Henri Matisse was a virtuoso of colour. His warm, shimmering, and radiant colours delighted the young Loïs Frederick who was searching for an absolute of colour. 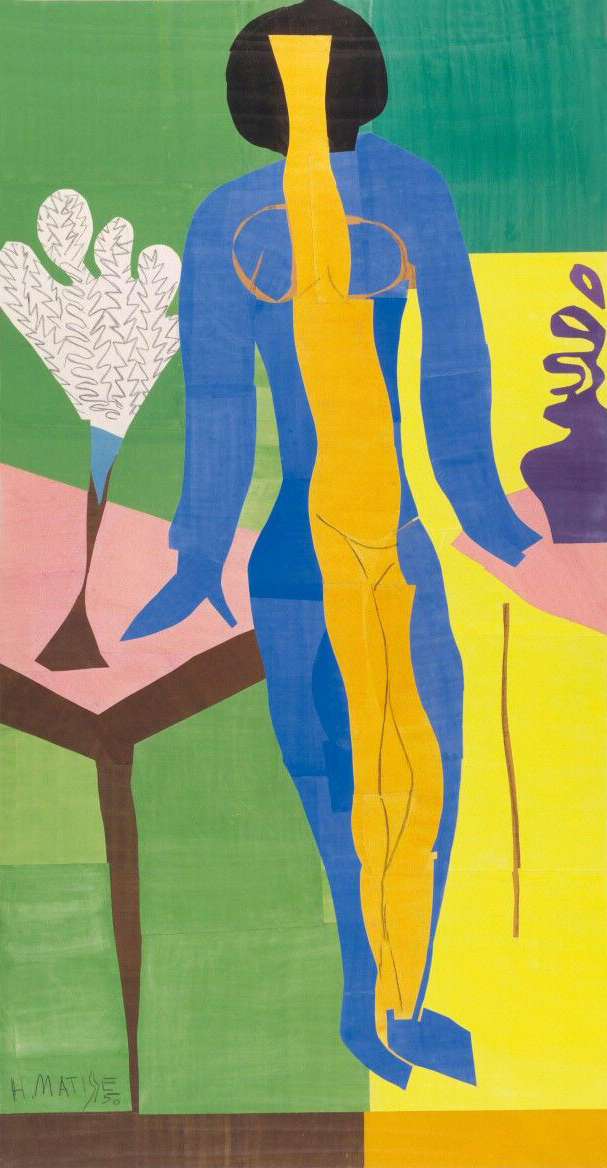 The second jolt was her encounter with Mark Rothko’s work, in the early 1950s. With Mark Rothko, colour becomes vibration, it becomes light. “l’m not interested in colour, it’s light l’m after”, he claimed. From then on, Loïs Frederick continually drew on her infinite palette to capture the intensity of light. A challenge against which she would measure herself all her life. 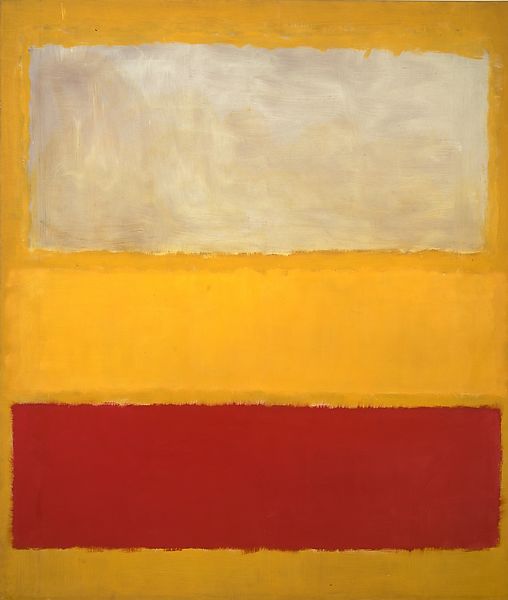 At the Heart of the Adventure of American Abstract Expressionism: Choosing Colorfield Painting

The painter Loïs Frederick followed in the wake of a first generation of artists from American Abstract Expressionism comprising Jackson Pollock and Lee Krasner, Willem de Kooning, Robert Motherwell, Franz Kline and Mark Rothko. This artistic movement, born spontaneously in the 1950s in the USA, is not based on any written manifesto. It considers that the only thing that counts is the visual language. Far from the traditional method of painting on canvas, American Abstract Expressionist artists created a new way of painting in which the gesture becomes one with the work itself. With them, a new relationship between gesture, colour and material is envisaged. 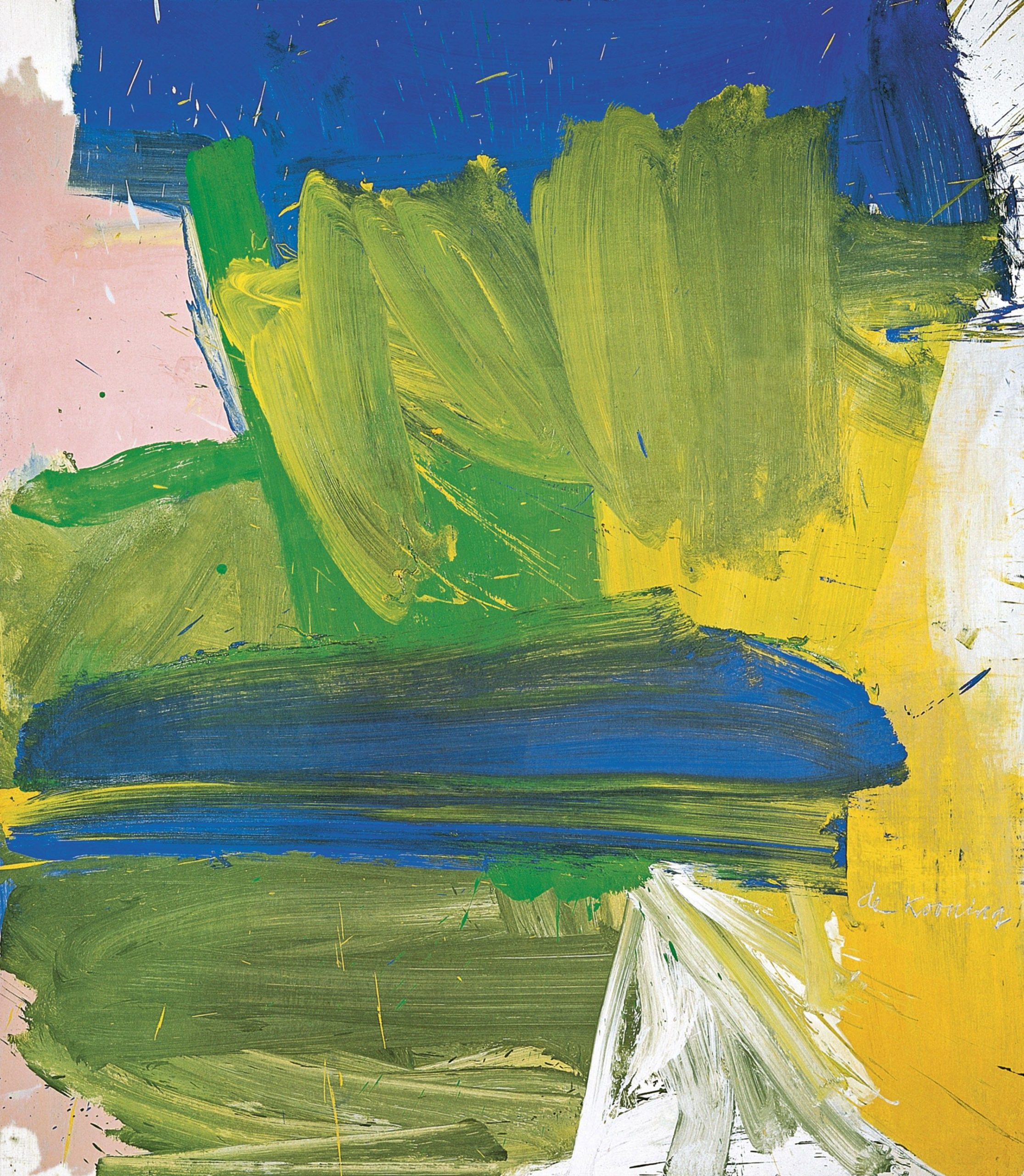 From then, two sensitivities reflected each other in this movement: on the one hand Action Painting, gestural painting, spontaneous and nervous, with Jackson Pollock
as the emblematic personality; on the other, what the American art critic Clement Greenberg called “Colorfield Painting”, a type of painting made of superimposed fields of colour that is incarnated by Mark Rothko among others.

In 1942, Mark Rothko declared: “We favour the simple expression of the complex thought. We are for the large shape because it has the impact of the unequivocal. We
want to reaffirm flat painting. We wish to reassert the picture plane. We are for flat forms because they destroy illusion and reveal truth.”

The artist Loïs Frederick’s work can be fully integrated with Colorfield Painting. Following on from the first generation of painters: Mark Rothko, Arnold Gottlieb, Clyfford Still and Barnett Newman, and like her contemporary Helen Frankenthaler, Loïs Frederick worked in flat areas of colour that she used in strata, removing any depth in the work. 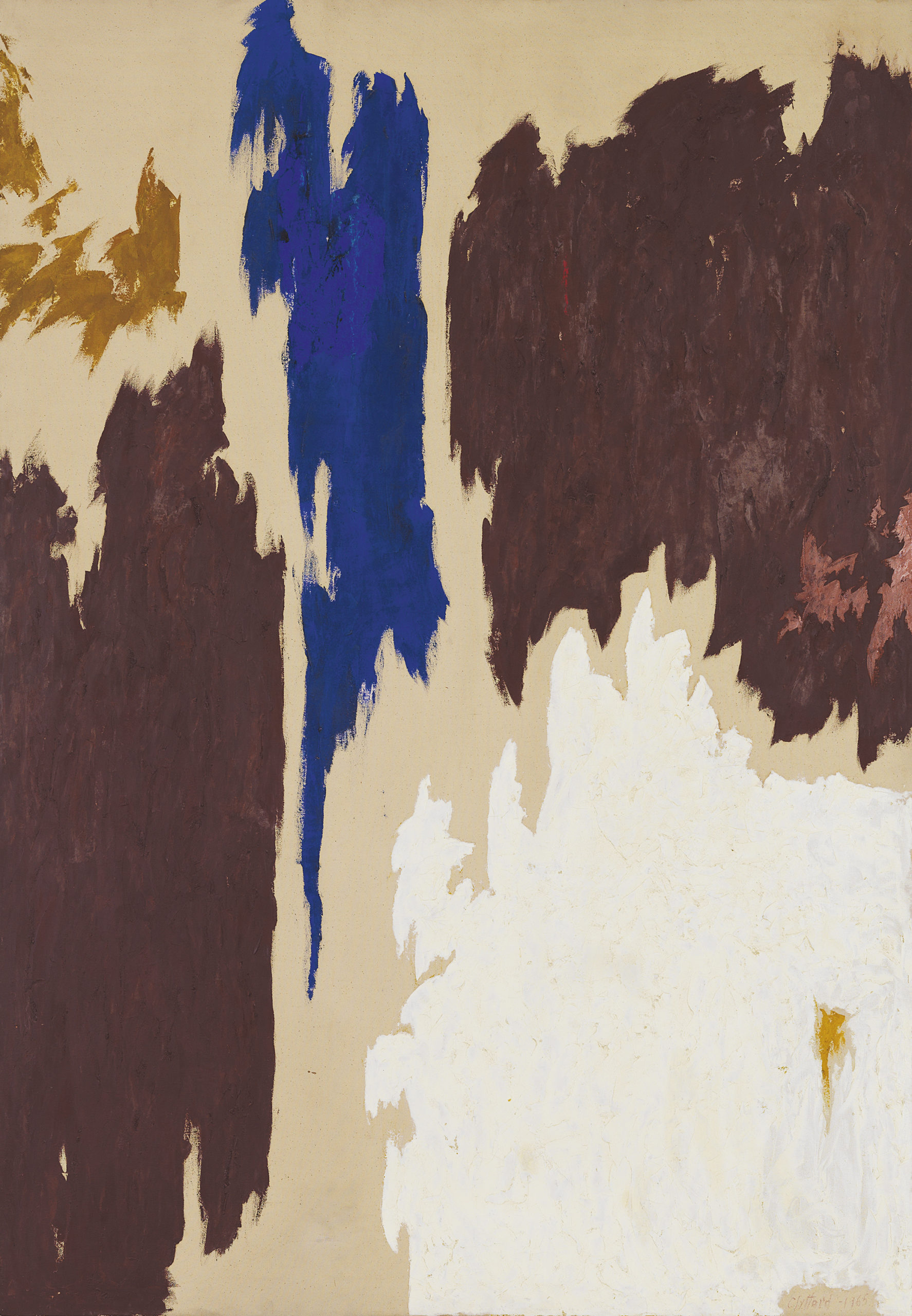 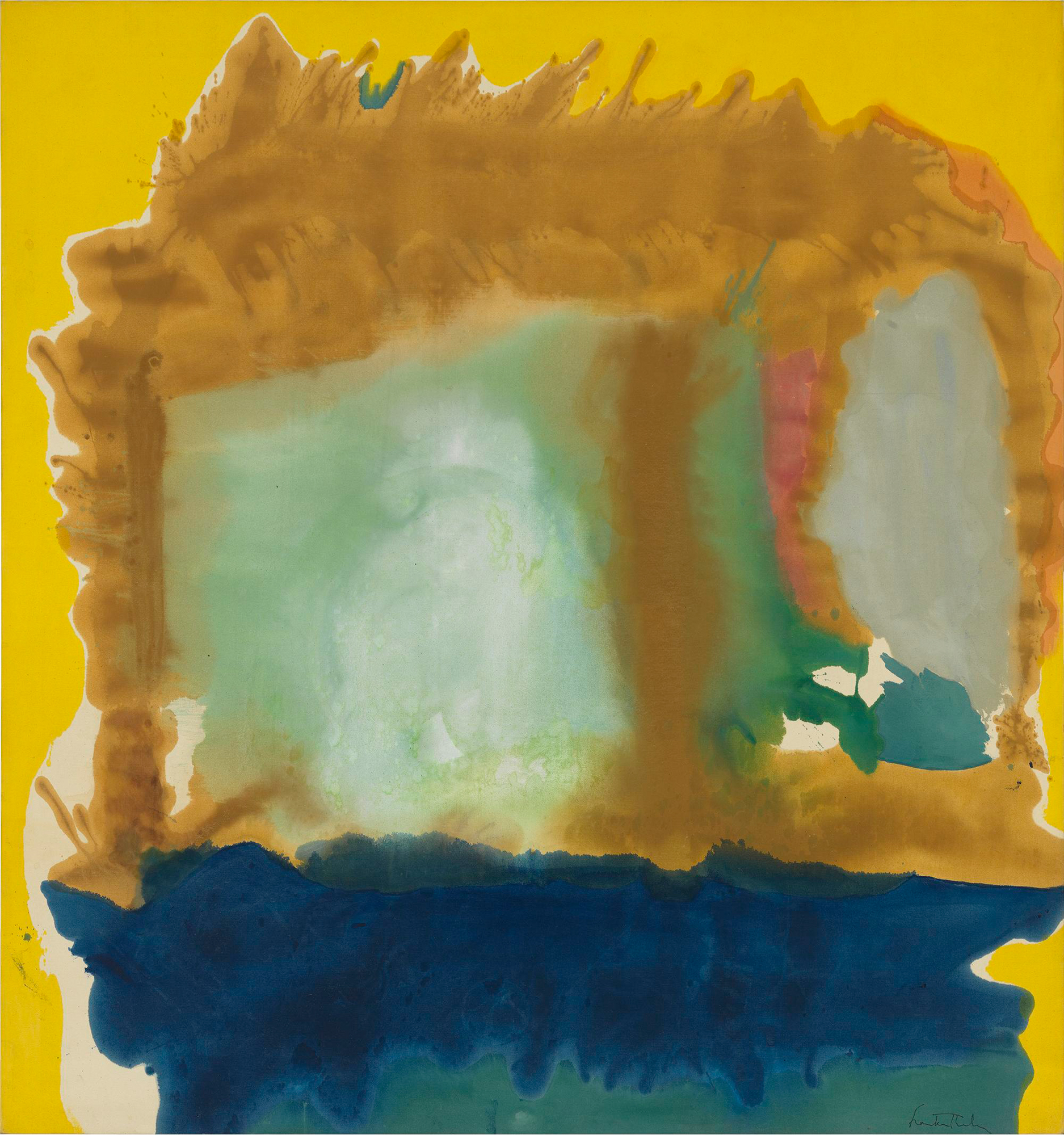 Coming from the agricultural plains of Nebraska, the painter Loïs Frederick was an earthling who created a solidly constructed form of abstraction in her art. While Mark Rothko worked horizontally with his brush to build up his rectangles of colour with blurred edges, and create light and vibrancy, Loïs Frederick used her gesture in ascending and descending movements. Her painting technique was thus similar to the push and pull perfected by Hans Hofmann in which colours placed in dense planes, “emerge from” and “recede” on the support, creating a network of contrasts in the visual space.

Like Jackson Pollock and Robert Motherwell, Loïs Frederick worked with the canvas placed on the ground, facilitating the field of vision: wider, the immensity of spaces is more easily viewed. But unlike Jackson Pollock who employed all his physical energy in a creative gesture, Loïs Frederick used her paintbrush in a slow, controlled, even meditative creative process. It is intense but contained within meshes of colour spread out and superimposed. 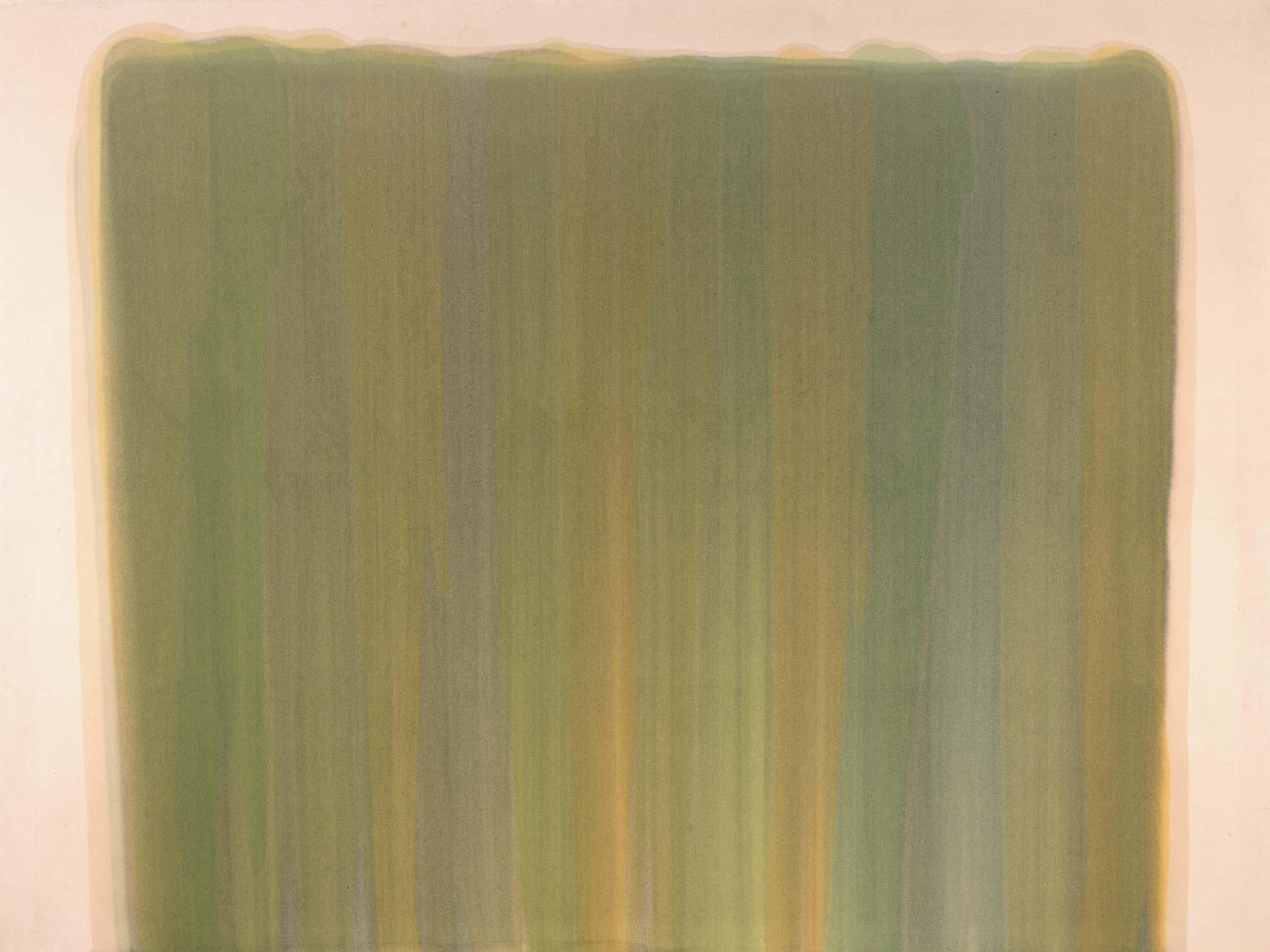 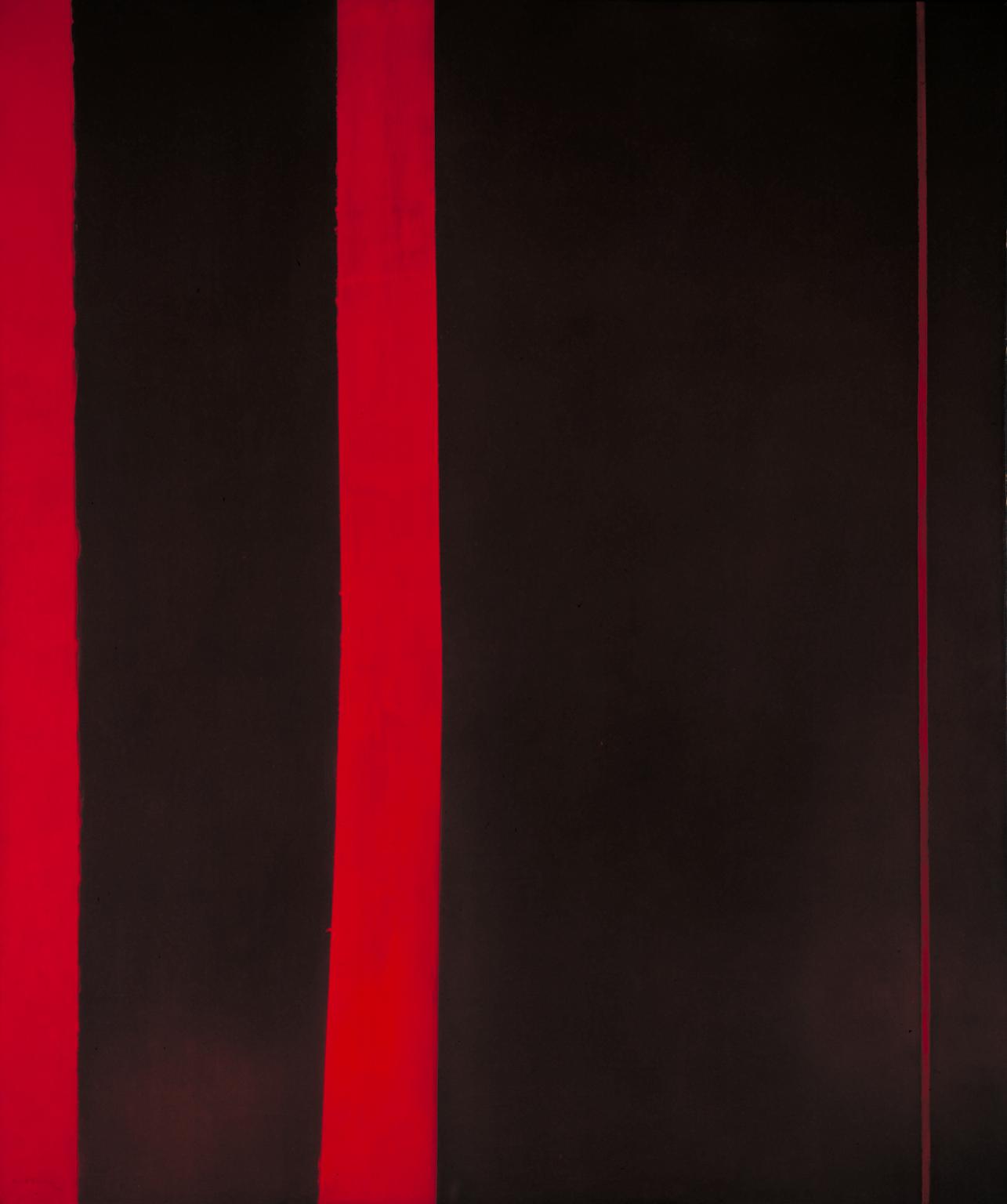 While Barnett Newman used his “zips“, vertical elements that cut through the planes of colour on either side of his compositions and Morris Louis placed his paintbrush beyond the canvas field, Loïs Frederick worked with verticality taking into account the limited frame of her support. The paintbrush stops well before the edge of the canvas, creating a network of colour masses that are both solidly constructed and form a floating space, suited for meditation.

With Loïs Frederick, masses of pure colour are superimposed, interpenetrate and meld together to absorb and reflect light. Contrasts are formed: colour imposes itself and withdraws, creating transparency. The viewer’s gaze is then lost in this mesh of colours, travels between the various surfaces. Like late Monet and his large paintings of waterlilies, Loïs Frederick creates an immersive experience in the work: direct contact with colour, with light, in a space without a horizon line. A meditative space like an echo of the Rothko Chapel and its fourteen paintings, commissioned by the collectors Jean and Dominique de Ménil and erected in Houston in 1964. 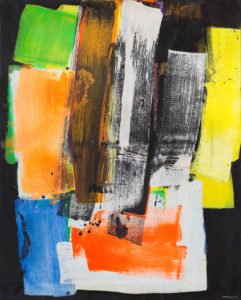 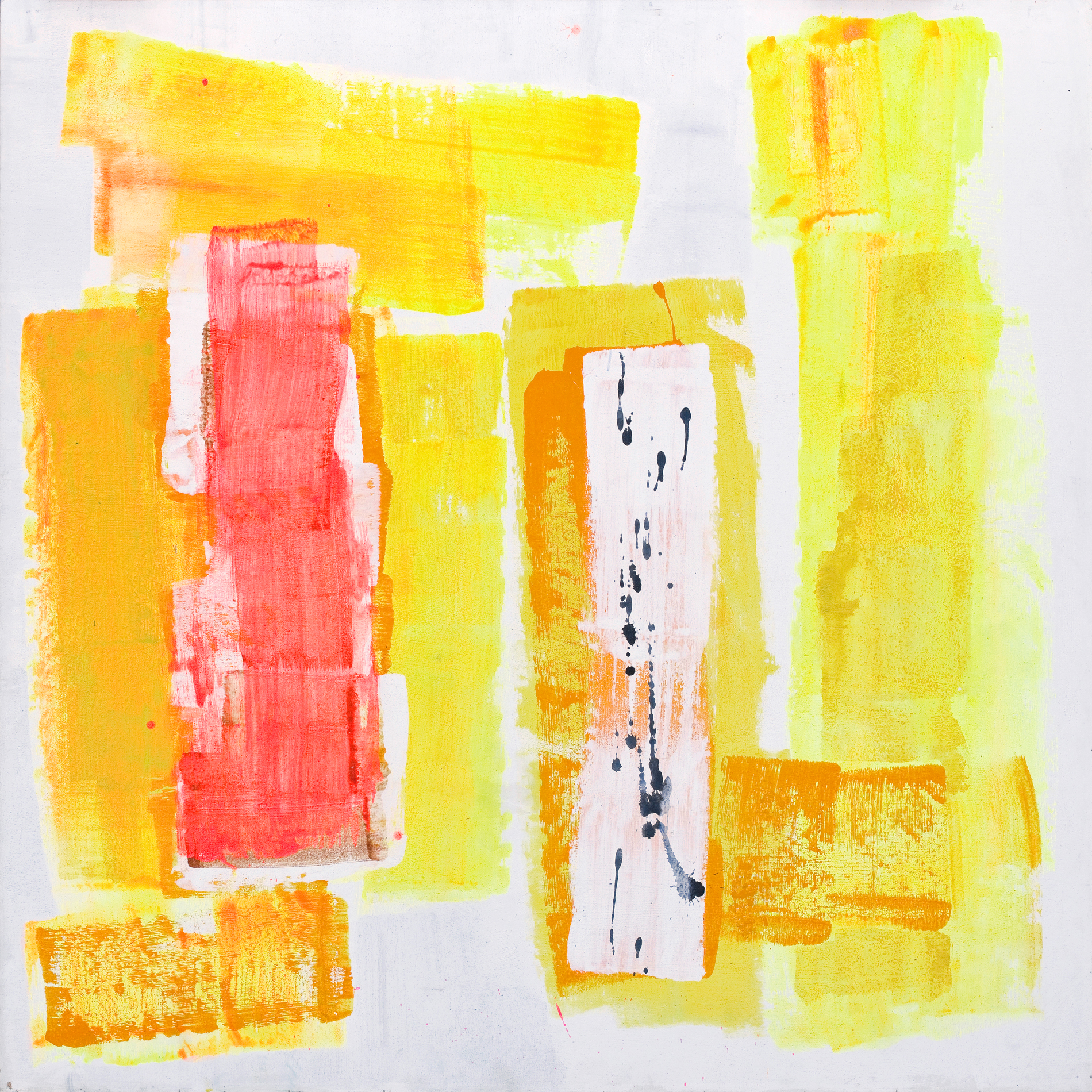 “an artist of light and space, she combines oil, fluorescent and acrylic paint” Space-light. Colour-space-light. Form, and the huge explosion of a vital impulse. Although she sometimes creates more solemn, even dramatic works, her art is above all a hymn to light, life (…)” wrote Henry Galy-Carles about her work.

“Latitude Rome. Altitude 900 metres. The sun, the light, whatever the season, are always there. Climate of contrasts…” is the description Michel Faucher gave of the artist’s native land.

After a naturalist palette, in the early 1970s the painter Loïs Frederick adopted acrylic, and even more, fluorescent paint that allowed her to procure the most audacious of palettes, full of contrasts: strident blues, greens, yellows, pinks, that are even deafening. Nevertheless, the saturated colour allowed light to dawn from the background.

In this painting from 1973, massive blocks of colour are superimposed, interconnect and absorb each other. The colour creates vibrancy. By using fluorescent paint, the
colour is also made light without even using yellow. In an atmosphere that is neither mineral, nor aquatic, the light irradiates from the background of the canvas, like the light from a lighthouse in a blueish fog. Only a gap in the centre, like an imprint, graffiti, pierces this cope of stratified colour. Here the planes give structure to the composition without creating an overall hierarchy. A built space the forms of which seem to float. The edges are blurred.

Profoundly marked by her American culture, the painter Loïs Frederick celebrates in her works of Colorfield Painting, the emotion in the hugeness of infinite spaces and the intensity of the strident light of her native region.
From this land of contrasts, her works are reflections of these visual jolts. With great internal power, her art is as much an ode to light as an expression of “gushing but controlled forces” (Henry Galy-Carles), like a covered volcano that is never extinguished.

Art Gallery Diane de Polignac » The Newsletters » Newsletter Art Comes to You NO. 10 Loïs Frederick “The Aventure of Colorfield Painting”