Printmaking was an integral part of the work of Sam Francis. The artist, who began working with prints in the 1950s, developed a passion for printmaking and studied its techniques throughout his career.

Sam Francis experimented with lithographic printing techniques in the 1950s courtesy of Tatyana Grosman, who founded Universal Limited Art Editions in 1957 and published works by artists such as Sam Francis, as well as Larry Rivers, Robert Rauschenberg, Robert Motherwell, Helen Frankenthaler, Jasper Johns, Barnett Newman, Claes Oldenburg and Cy Twombly, among others. Many of the works produced were acquired by the Metropolitan Museum of Art in New York and the Art Institute of Chicago.
In Switzerland, the gallery owner Eberhard W. Kornfeld encouraged Sam Francis to produce lithographic prints. The first series – which comprised 60 works – was created in Zürich in 1960 with the printer Emil Matthieu.

Printmaking and painting would inspire and influence each other throughout Sam Francis’ work. The horizontal nature of lithographic work encouraged Francis to paint on canvases laid on the ground, while the artist strove to find the same vibrancy of colour in printmaking as in painting. One of his assistants, Dan Cytron, recalled: “Sam could afford any pigments he wanted and he wanted colours which were rare or obscure, such as real cadmium, or cobalt-based colours, not available to the general public.” Francis was not afraid to transcend the boundaries between mediums, using products intended for photography or printmaking on his canvases. His innovative qualities made him a genre-breaking artist.

Painting and printmaking also presented fundamental differences: a multi-step process, printmaking required the artist to visualise – in advance and in an inverted manner – the final results of superimposed coloured plates. A real puzzle, it provided the artist with new challenges: “I guess what is pleasing is that compression of time and space, in that one moment of pressing a button [on the press] and pulling it out. That is compressions – physical, mental and spiritual. Everything is compressed into that moment. That is very different from making a painting.” He added: “It’s healthy, it forces me to think these things out, unlike painting, which is much more direct.”

Towards the end of the 1960s, Francis made more and more room for white in his work, surrounding the empty space with touches of colour. The white used was not the white of ink or paint, but the colour of the paper itself – the result of the artist’s search for absolute purity of luminosity. “Paper has its own beauty…” Francis said, “In itself, it is already complete. So you are adding completeness to completeness when you start… The actual piece of paper has its own message.”

In 1970, Sam Francis opened ‘The Litho Shop’: a printmaking workshop in Santa Monica that provided a haven for experimentation in total creative freedom. The artist worked with experienced printmakers such as Jacob Samuel – who stayed at The Litho Shop for 18 years – and George Page. Working together, they explored different printmaking techniques, including but not limited to lithography, serigraphy (screen printing), etching and aquatint.

Sam Francis also worked with the Gemini printmaking studio, which opened in Los Angeles in 1965. It was at that very studio that the artist was introduced to screen printing. One of Francis’ last projects with the Gemini studio was a work of 36 different colours, ranging from the most intense to the most pastel hues. The subtleties achieved were created through the superimposition of numerous silk screens. The work illustrates Sam Francis’ penchant for pushing the boundaries of each medium to achieve the highest possible level of refinement.
The Gemini printmaking studio also published works by Ellsworth Kelly, James Rosenquist and Richard Serra, among others.

Sam Francis began producing etchings in 1973, the first examples of which were published by 2RC Edizioni d’Arte, in Rome. Some were created in black and white, others in colour. In 1981, the artist began working on etchings with David Kelso at the Gemini printmaking studio. Francis also set up an etching press at The Litho Shop. 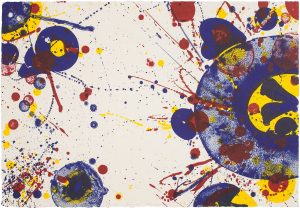 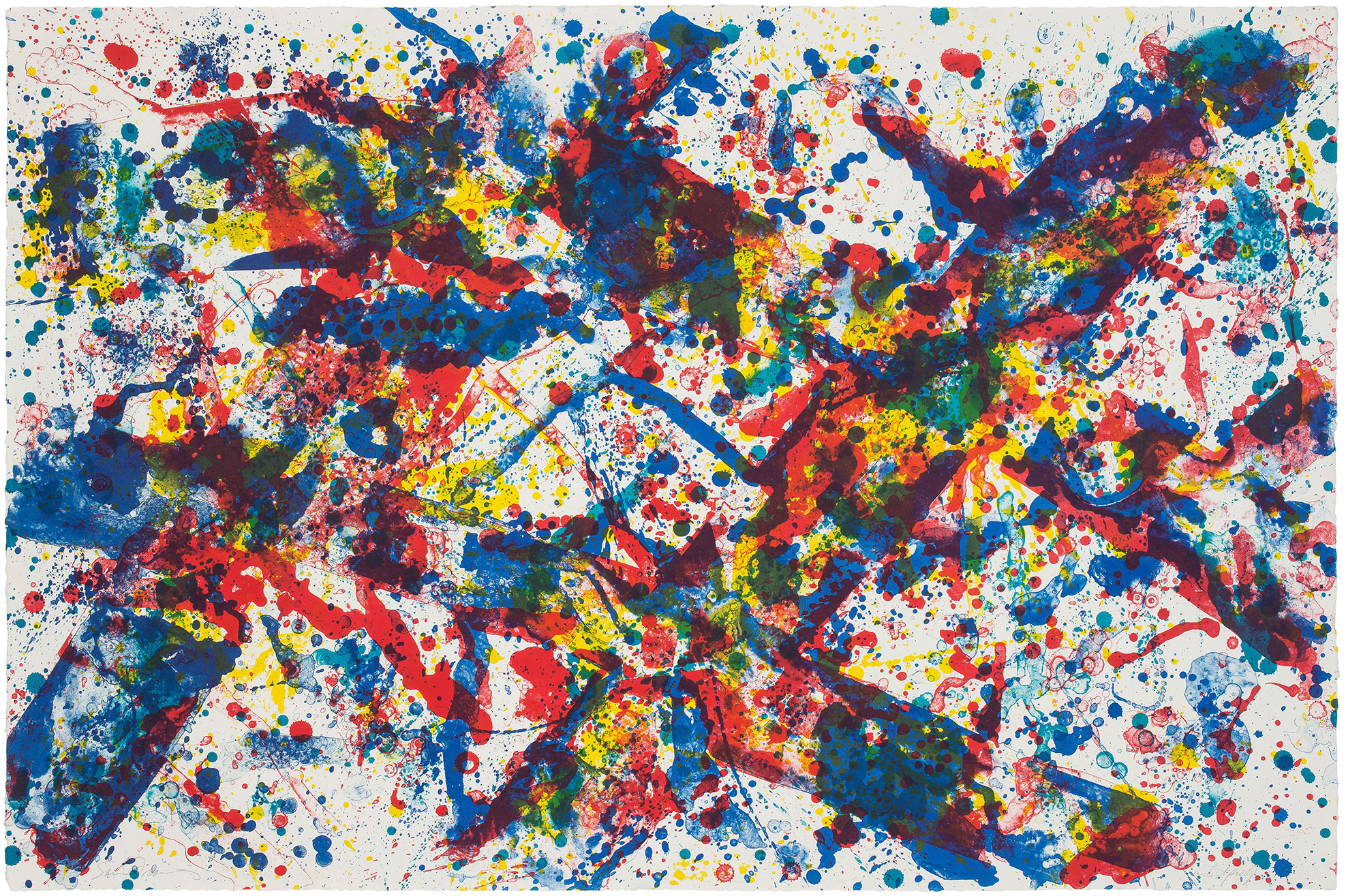 In printmaking and painting alike, Sam Francis was a master interpreter of colour. A virtuoso artist, he embraced numerous techniques and continually pushed back their limits. For Francis, prints were works in their own right and represented a fundamental part of his creative output.