At the heart of abstraction:
Marie Raymond and her friends 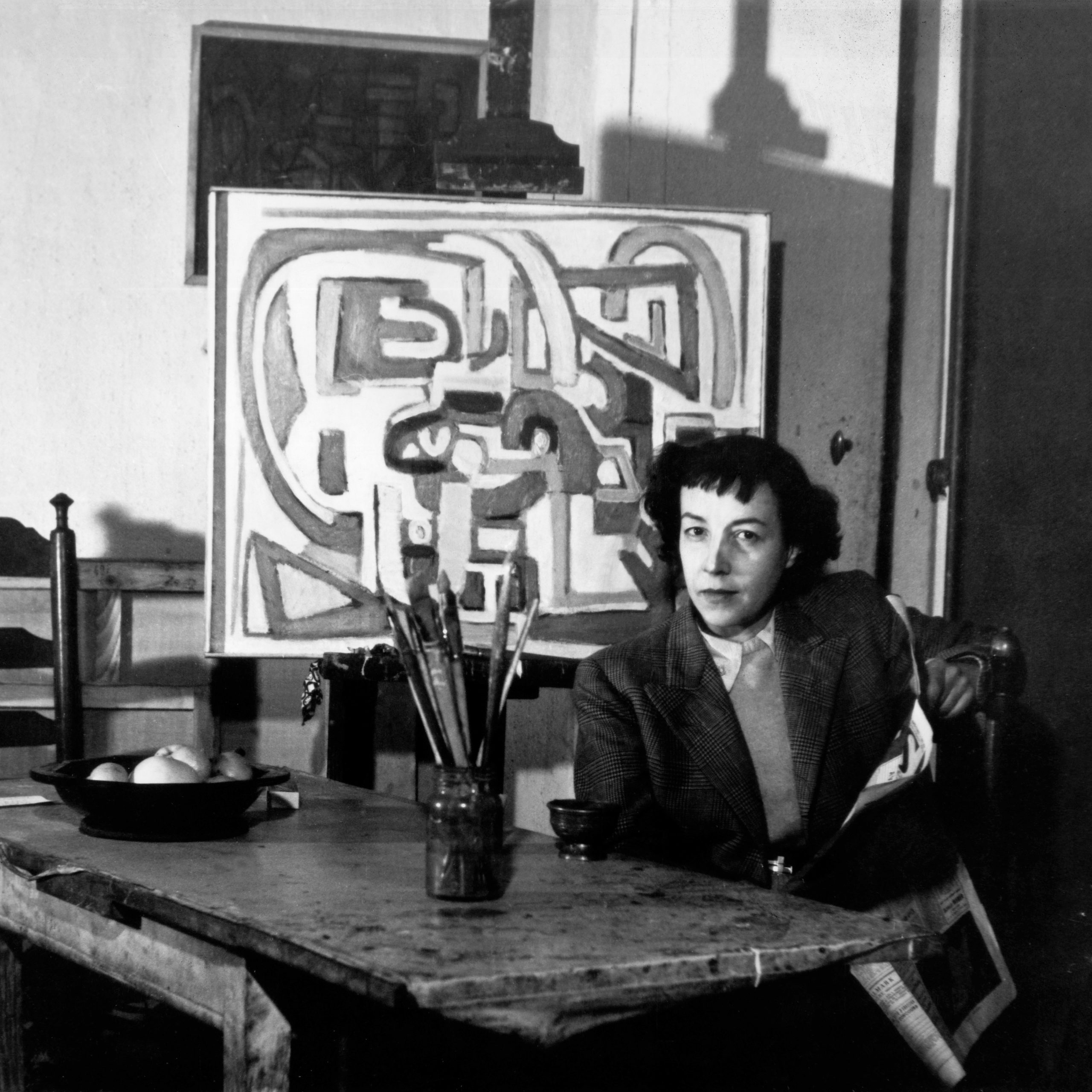 Known as the mother of Yves Klein, Marie Raymond was also an artist in her own right, a part of the avant-garde of her times. In the aftermath of the Second World War, she stood alongside Hans Hartung, Pierre Soulages and Gérard Schneider as one of only a handful of women painters to adopt pure abstraction in her art, as opposed to proponents of figuration. Marie Raymond’s work was exhibited at the Galerie Colette Allendy in 1949 alongside Jean Deyrolle, Émile Gilioli, Pierre Soulages and Hans Hartung. A renowned artist and a prominent figure in the Paris art scene, she embodied the issues at stake in the revival of painting after 1945. In addition to her activities as a painter, Marie Raymond organised the Lundis de Marie Raymond (“Marie Raymond’s Mondays”) from 1946 to 1954 in her apartment and studio on Rue d’Assas in Paris. The weekly event brought together her painter friends, artists, art critics, gallery owners, photographers, writers, museum directors and collectors.

The exhibition At the heart of abstraction: Marie Raymond and her friends, examines Marie Raymond’s work, for the first time, alongside the works of her artist friends, who shared the same innovative vision of abstract painting. The exhibition features landmark works by Pierre Soulages, Hans Hartung, Gérard Schneider, Jean Dewasne, César Domela, Youla Chapoval, Camille Bryen and Nicolas de Staël. Against the background of Marie Raymond’s remarkable artistic trajectory and friendships, the exhibition presents a fresh perspective on abstract art in Paris at the turn of the 1950s.

As Yves Klein’s mother, Marie Raymond was also in contact with a younger generation of artists—the friends of her son who formed the Nouveau Réalisme group in the early 1960s. Attentive to their artistic endeavours, she supported them and invited them to her famous Monday events, where two generations of artists—both of whom played a major role in the history of art in the 20th century—were able to meet and interact. As such, the exhibition represents the perfect opportunity to present early works by Yves Klein, Jacques Villeglé, Raymond Hains, César and Jean Tinguely, who sought to question the principles of abstract art—a movement that was flourishing in Paris at the time.

Through these groundbreaking encounters between two generations of major 20th century artists, the exhibition presents an eye-opening reinterpretation of the Paris art scene from the interwar period to the 1960s. By examining the historical importance of Marie Raymond, it highlights the disruptions and continuities that shaped the evolution of abstract and contemporary art during the second half of the 20th century. By showcasing the various figures that made up Marie Raymond’s circle of friends, the exhibition also sheds light on how these new forms of artistic creation were received, in particular through the decisive role played by art critics, gallery owners, and collectors such as Gildas Fardel, Charles Estienne, Georges Boudaille and Pierre Restany—who were among the guests in attendance at the Lundis de Marie Raymond.

The exposition was curated by Victor Vanoosten and cocurated by Christian Demare. It is the result of extensive research conducted in collaboration with Yves Amu Klein, using Marie Raymond’s personal archives and those kept by the heirs of her friends.

It brings together about 70 works (paintings, drawings, sculptures, films) by some 20 artists from public and private collections in France.

Offering an opportunity to rediscover the avant-garde trajectory of one of the leading women artists of the Parisian abstract movement in the 1950s, the exhibition invites audiences to explore a new and original reinterpretation of this essential chapter in the history of 20th-century art through the lens of her artistic and personal friendships.

List of artists featured in the exhibition alongside Marie Raymond:

1 – Marie Raymond: a woman artist
Alongside the Dutch painter Fred Klein, whom she married in 1926 and who practised figurative and decorative painting throughout his life, Marie Raymond carved out her own path by developing her very own pictorial explorations combining surrealism and abstraction from the end of the 1930s. During the war, Raymond settled in Cagnes-sur-Mer, where she painted “imaginary landscapes” inspired by the hinterland. It was during this period that she met Nicolas de Staël, who became a close friend.

2 – Choosing abstraction
After the Liberation of France, Marie Raymond established her own abstract language based on the expression of colour. She was one of the champions of abstraction in the Paris art scene. In 1949, Raymond was awarded the Kandinsky Prize with Youla Chapoval; former winners of the prize included Jean Deyrolle, Jean Dewasne and Serge Poliakoff.

3 – Lundis de Marie Raymond
From 1946 to 1954, Marie Raymond gathered artist friends and figures from the French and European art world every Monday in her small apartment and studio on Rue d’Assas in Paris. The weekly Lundis de Marie Raymond (“Marie Raymond’s Mondays”) formed an essential meeting point and platform for exchange in the postwar Parisian scene. They brought together the painters Hans Hartung, Gérard Schneider, Pierre Soulages and César Doméla, the art critics Charles Estienne, Georges Boudaille and Pierre Restany, as well as gallery owners Colette Allendy and Iris Clert, collectors, such as Gildas Fardel, and museum directors, such as Willem Sandberg.

4 – The abstract movement in Paris in 1950, centred around the Galerie Colette Allendy
In 1949, 1950 and 1956, Marie Raymond was one of several artists exhibited at the Galerie Colette Allendy—one of the first galleries to support abstract artists. In 1950, the exhibition Peintures et sculptures abstraites (“Abstract Paintings and Sculptures”) presented works by Jean Deyrolle, Émile Gilioli, Hans Hartung, Jean Leppien, Marie Raymond, Day Schnabel, Gérard Schneider and Pierre Soulages. Colette Allendy’s avant-garde choices and her friendship with Marie Raymond reveal a panorama of the Parisian abstract movement that triumphed on the international scene during the 1950s.

5 – Marie Raymond’s support for the younger generation
As Yves Klein’s mother, Marie Raymond welcomed her son’s young friends—César, Jacques Villeglé, Jean Tinguely, Raymond Hains—to her renowned Monday receptions, where they presented some of their works. In contact with abstract painters of the older generation, the younger artists had the chance to discover their predecessors’ paintings, against the background of which they went on to make their own stand artistically and developed the fundamental principles of their art. This would give rise to the Nouveau Réalisme movement in 1960, which was conceived by Pierre Restany, one of Marie Raymond’s guests at her weekly Lundis de Marie Raymond events.

6 – Marie Raymond’s large-format works
The death of Yves Klein in 1962 had a profound effect on Marie Raymond, who thereafter began work on a new series of large-format paintings and collages. Resembling imaginary visions somewhere between dreams and reality, they formed a realm where she never stopped exploring the cosmic power of colour until her death in 1989.

Marie Raymond: As seen by her friends

“For years, Marie Raymond has cultivated—beyond the buzz—painting, understatement and discretion. We forget, or pretend to forget, that Marie Raymond took part in the first exhibition since the Liberation of France to dare to present itself using the title Abstract Painting in February 1946. […] From the outset, she has always been a colourist, such a fine specialist in the use of colour.”
Charles Estienne

“We loved [the paintings] of Marie Raymond. We became close after my exhibition in 1949, for which Marie wrote an article in the Dutch magazine for which she was a correspondent. It made it clear that she was passionate about the use of black in painting. I remember the title of the article, which was devoted to me; it was Osiris is a black god.”
Pierre Soulages

«It was through Yves that I met Marie Raymond. It was at the Monday receptions that she organised in her apartment and studio on Rue d’Assas in Paris. […] In the atmosphere of awakening that permeated post-war Paris, her Monday events were an opportunity for artists, art lovers and collectors to meet informally, to talk about all the different art forms that were emerging, that were daring to push boundaries. I even showed a film once with Raymond Hains on torn posters, which was very different to what she was doing.”
Jacques Villeglé

The exhibition At the heart of abstraction: Marie Raymond and her friends was organised in partnership with Arteos Expositions. Created in 2016 by Victor Vanoosten, Arteos Expositions organises exhibitions dedicated to 20th and 21st century art in collaboration with museums.

The Musée de Tessé previously collaborated with Arteos Expositions for the retrospective exhibition Cobra, la couleur spontané (“Cobra: Spontaneous colour”) which gathered most of the members of the Cobra group in Le Mans from November 2017 to February 2018. Conceived in conjunction with the Musée de Pont-Aven, where it was exhibited from March to June 2018, the exhibition was accompanied by the publication of a 304-page book—Cobra, une explosion artistique et poétique au coeur du XXe siècle (“Cobra: An artistic and poetic explosion in the midst of the 20th century”), which was compiled under the editorship of Victor Vanoosten. 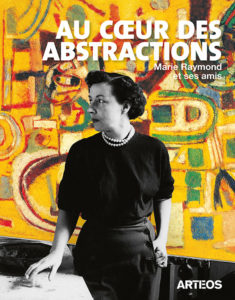