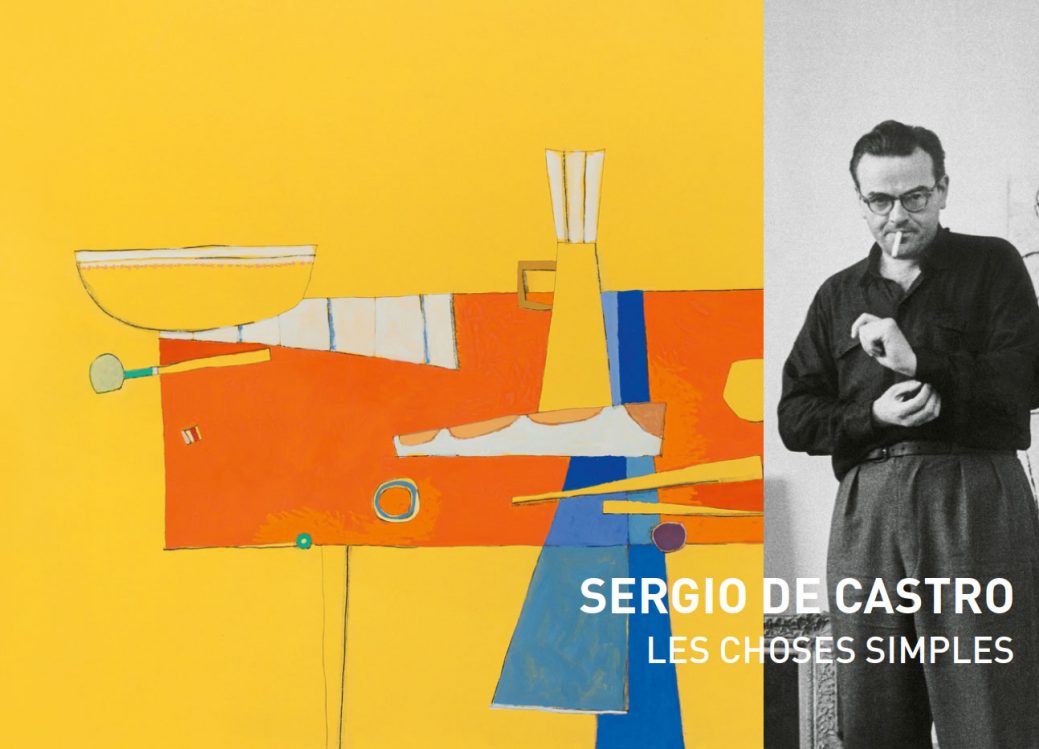 From then on, he retired from his activities as a composer to devote himself to painting and stained-glass work. He was soon exhibited in Parisian galleries: his first solo exhibition took place in 1952 at the Galerie Jeanne Castel , where he presented a collection of still lifes painted using egg tempera – a technique that Sergio de Castro was beginning to use, inspired by the Italian Primitives that he had admired on two earlier trips to Italy.

The exhibition The Simple Things presents an group of still lifes created between 1952 and 1956: two oils on canvas and twenty-five works on paper painted with gouache or tempera. These still lifes are organized into five themes: table paintings, chair paintings, constellations paintings, fish paintings and table-column paintings.

These artworks present us with some of the artist’s personal items. Through these works, Sergio de Castro has given us a glimpse of his life in the studio. The artist settled permanently at 16 bis Rue du Saint-Gothard in the 14th arrondissement of Paris in 1953, in a studio that was once occupied by Paul Gauguin

Colour played an essential role in the composition of Sergio de Castro’s still lifes thanks to his choice of coloured Canson paper. The colour of the paper became the colour of the composition’s background, as well as the colour of certain objects defined by their contours alone. As such, the artist explored the idea of fullness and emptiness, the space in reserve playing a role as important as the solid colour planes. The colour in his works is exuberant, becoming light, colour, surface and form all at once.

The objects in his worksare not represented in a realistic way but rather rendered geometric in form, to the extreme. There is no relief, shade or depth. Sergio de Castro fully embraced the flatness of the sheet of paper and rejected the illusion of space. The objects are presented frontally to the viewer on a raised surface to facilitate their viewing.

As Charles Sterling wrote, still life is “that fragment of the world that can be put in order twice, before painting it and while painting it”. This is because the arrangement decided by the artist in the observational phase does not correspond to the arrangement that is painted. Floating on a level plane, without any depth, the objects are arranged in a precarious balance between order and disorder. The objects are not immobile but dancing. These are not static compositions as the term “still life” implies.

The objects are like musical notes on a score: Sergio de Castro was a musician before he became a painter and this part of his life profoundly influenced his pictorial work. While the still life genre is often a silent one, Sergio de Castro’s works are particularly musical.