ROUGEMONT’S WATERCOLOURS
From planes to volumes 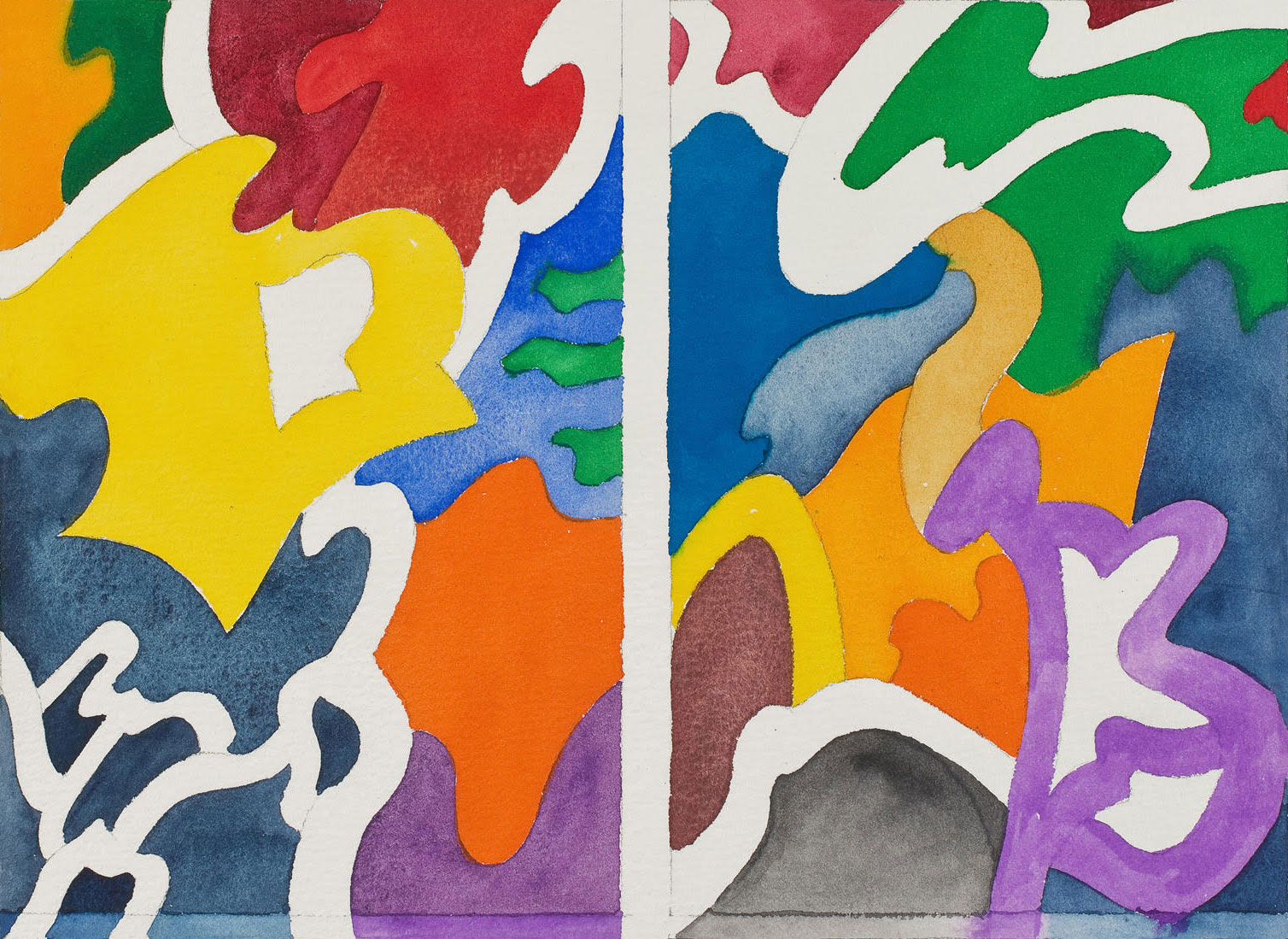 Work of the artist painter Rougemont represents a perpetual quest in pursuit of form and its evolution through space. Following on from his curved ellipses, cylinders and woven surfaces, the serpentine line has, since the 2000s, become the primary medium of Rougemont’s artistic wanderings. These fluid, sinuous lines glide over the paper or canvas, enabling the artist to explore the effects of colour, shade and light.

A multidisciplinary painter, sculptor and designer elected a member of the Painting section of the French Académie des Beaux- Arts, Rougemont is above all a painter—one for whom all everything starts with paper. It is indeed through the medium’s flat surface that the artist creates a vision of volume.

PAPER AS A POINT OF DEPARTURE

For the painter Rougemont, painting in watercolour on paper represents a first step in visualising his creative ideas. Each watercolour reveals the genesis of the artist’s creative work to the viewer. The freedom granted by the paper’s surface inspires Rougemont to project himself on a larger, even monumental scale, whether through painting (fig.1) or sculpture (fig.2). A kind of modello, the watercolour medium gives tangible form to the artist’s vision, creating a confrontation of colours and forms. 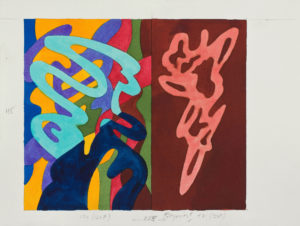 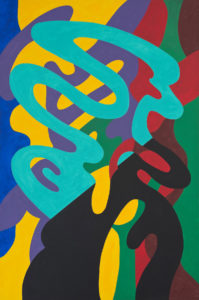 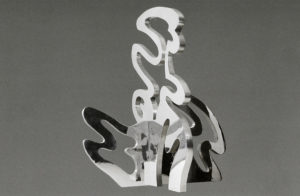 WATERCOLOUR AND THE EFFECTS OF LIGHT

In this series of watercolours, the artist painter Rougemont explores the effects of light on colour, showing us, by turn: a window offering a foray, or opening, to the outside world (fig.3); the watercolour and its shadow, or double, positioned face to face (fig.4); and a piece of stained glass that makes the colours resonate with light, playing on the effects of transparency (fig.5). Each piece is marked by a burst of light erupting in an enchanting interplay of colours, like the refraction of light through a prism. 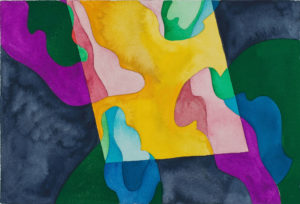 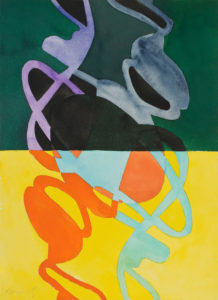 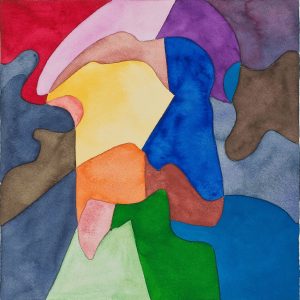 WATERCOLOUR AS A BASIS FOR SCULPTURE AND DESIGN

Watercolour also allows the artist to project his vision into the third dimension. Majestic forms viewed head-on tower over the paper, standing proudly outlined against its surface like a forest of interwoven shapes. Planted firmly in their backdrops, these visions of potential future sculptures take root on the paper, their shadows lengthening their forms, showing us a sculpture and its reflection, in darkness or light (fig. 6 & 7). We can also see the emergence of the free forms that the painter Rougemont uses in his design work (fig.8). 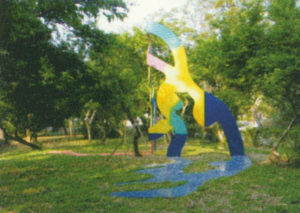 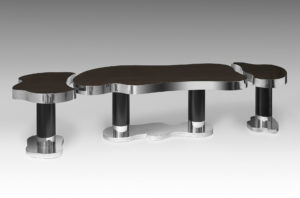 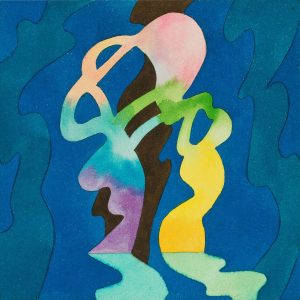 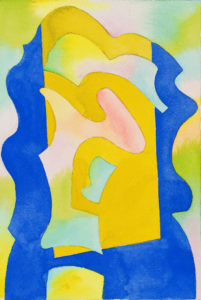 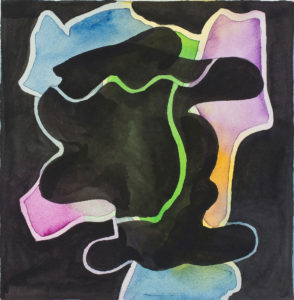 WATERCOLOUR: A UNIVERSE IN ITSELF

On paper, Rougemont gives order to his ideas, using the medium to define his framework. The margins and pencil annotations that can be seen in these pieces are indicators of the artist’s reflective and preparatory creative process. Free and spontaneous, these works on paper represent nonetheless an important body of work in its own right—a universe in itself, harmoniously orchestrated by Rougemont. Granting himself the freedom to reinterpret his watercolours in large format works, the artist allows colour variations, reworking the overall ensembles. 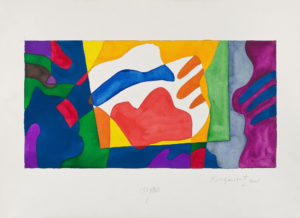 The painter Rougemont’s obsession with form was matched by a thirst for colour, which reigns supreme over the artist’s watercolour works. The chromatic prism reveals every possible colour in the spectrum, stretching out between shadow and light in a clash of sun-drenched and sombre palettes. Acid pinks and strident yellows run alongside steely blue, brown and British racing green. Forthright colours in diluted form with watercolour effects give form and structure to the space. Following in the footsteps of avant-garde artists such as Paul Gauguin and Henri Matisse, Rougemont is also a great colourist. 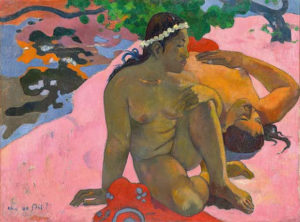 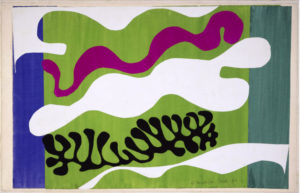 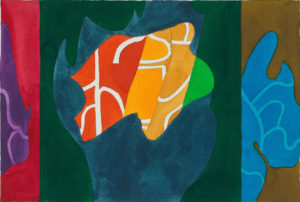 Let us recall the speech made by Arnaud d’Hauterives, Permanent Secretary of the Institut de France, at the ceremony officially welcoming Rougemont into the Académie des Beaux-Arts, in which he addressed the artist: “This period [in the United States] was a revelation for you, during which you received a ‘real lesson’ from the great French painters you admired, Léger, Matisse, Bonnard, but seen afresh through different eyes, in other words, set aside from any façades.” On a journey from the bold colours of Paul Gauguin’s paintings to Matisse’s paper cut-outs, Rougemont’s watercolours invite the viewer to dream of getaways immersed in the colours of the South of France, offering a window through which to escape. Light springs forth from the symphony of colour in a burst of radiance. And as Goethe, the art theorist, rightly noted: “Clarity is the balance between shade and light.”

Through his watercolours on paper, Rougemont lays the foundation for his artistic investigations of volume and monumental pieces, whether through painting, sculpture or design. Using the whole palette of the colour prism, the artist is able to explore the effects of light and shade. 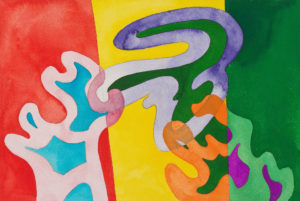 Art Gallery Diane de Polignac » The Newsletters » Newsletter Art comes to you NO. 15 Rougemont’s Watercolours From Planes to Volumes