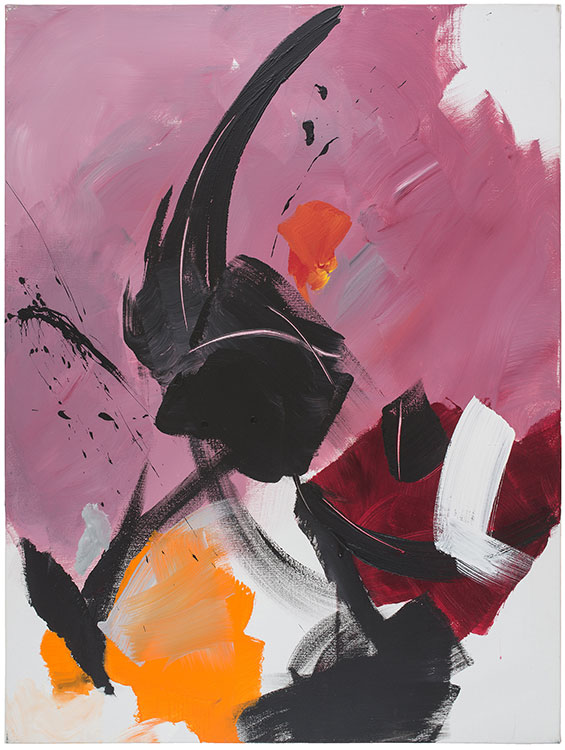 The artist Jean Miotte’s abstract painting style is built on the artist’s spontaneous gestures, which are enhanced by the space that surrounds them. Through his work, the artist examines the use of empty space, which brings its full strength to the pictorial movement in his art.

In the 1950s, the painter Jean Miotte’s paintings were composed of many different components: large, thick layers of paint were positioned close together, applied with a knife using an impasto technique, leaving little room for empty space, as if the surface of the canvas was contracting to gather the elements together at its centre. With numerous colours combined in agitated and nervous compositions, the materials took over the space, invading everything. The painting created itself with its own means. 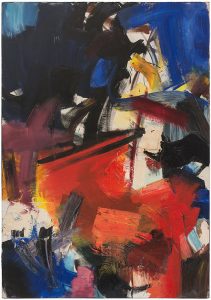 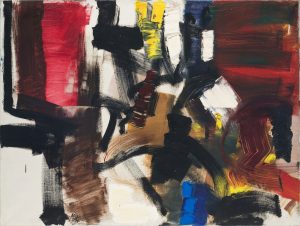 Towards the end of the 1960s, the painter Jean Miotte’s work underwent a radical evolution, which we can well imagine was influenced by the artist’s exposure to American painting. Jean Miotte met Sam Francis in 1952, a painter with whom he would exhibit several times. The influence of three exhibitions presented at the Musée d’Art Moderne in Paris—Cinquante ans d’art aux États-Unis [Fifty Years of Art in the United States] in 1955, Jackson Pollock et la nouvelle peinture américaine [Jackson Pollock and the New American Painting] in 1959 and the Franz Kline retrospective in 1964—should also be noted. Jean Miotte finally visited the United States for the first time in 1961 after receiving a prize from the Ford Foundation. Contemporary American painting gave the artist new momentum and inspiration, the result of which was a more minimal style of painting in which empty space would play an important role—which brings to mind the “empty” canvases of Sam Francis from the same period. 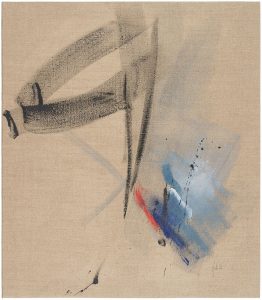 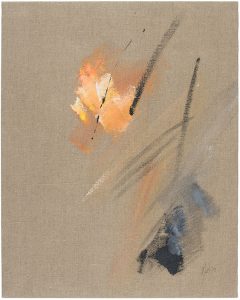 This interest in emptiness was illustrated in a very personal way by Jean Miotte, who decided to leave the linen canvas raw. Instead of being covered, as before, with a white preparation, the natural colour of the canvas took on an obvious presence, forming part of the composition. The artist’s quick and spontaneous brushwork was applied directly on this neutral canvas. Might this new relationship with space have been a tribute to the “discovery of the great American spaces” described by the artist himself? It should also be noted that Jean Miotte’s rapport with space was transformed in the artist’s own life experience. After his first visit to the United States, Miotte made a series of further trips across the Atlantic, and to Asia. Miotte travelled with ease and enthusiasm, and it was only natural that this would transform his approach to painting. 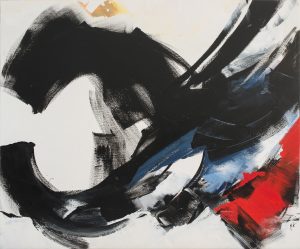 Emptiness took more space in the artist’s works and the background became white—a pure white that stood in sharp contrast to the colours and the black brushwork. The white radiated and erased boundaries, opening up the works and illuminating them. The physical characteristics of colours play an important role in the composition of Miotte’s works: through additive synthesis, all colours mixed together make white; and through subtractive synthesis, all colours mixed together make black. These scientific observations marked the artists of the twentieth century, who came to consider black and white paintings to be the most colourful works possible.

This white space thus played host to both gesture and colour, as the painter inscribed the expanse with his gestural markings. Miotte’s approach is perfectly illustrated in the film Jean Miotte, Espace secret shot by Gérard Langevine in 1983. In the film, we see the artist painting on a large glass surface, as if tracing his gesture in space. The spontaneous movement represents Jean Miotte’s identity, like a signature. All the more rapidly executed in the artist’s works in ink and gouache on paper, this movement bears witness to his immediate genius in the creative process. The gesture stands out in contrast from its background like a sculpture in the round. It is interesting to note that Jean Miotte created sculptures that also allowed him to question the relationship between signals and space. 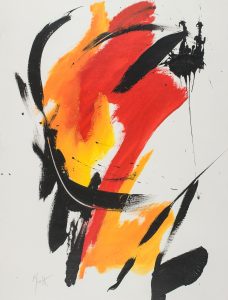 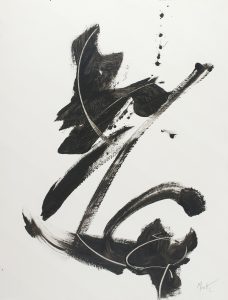 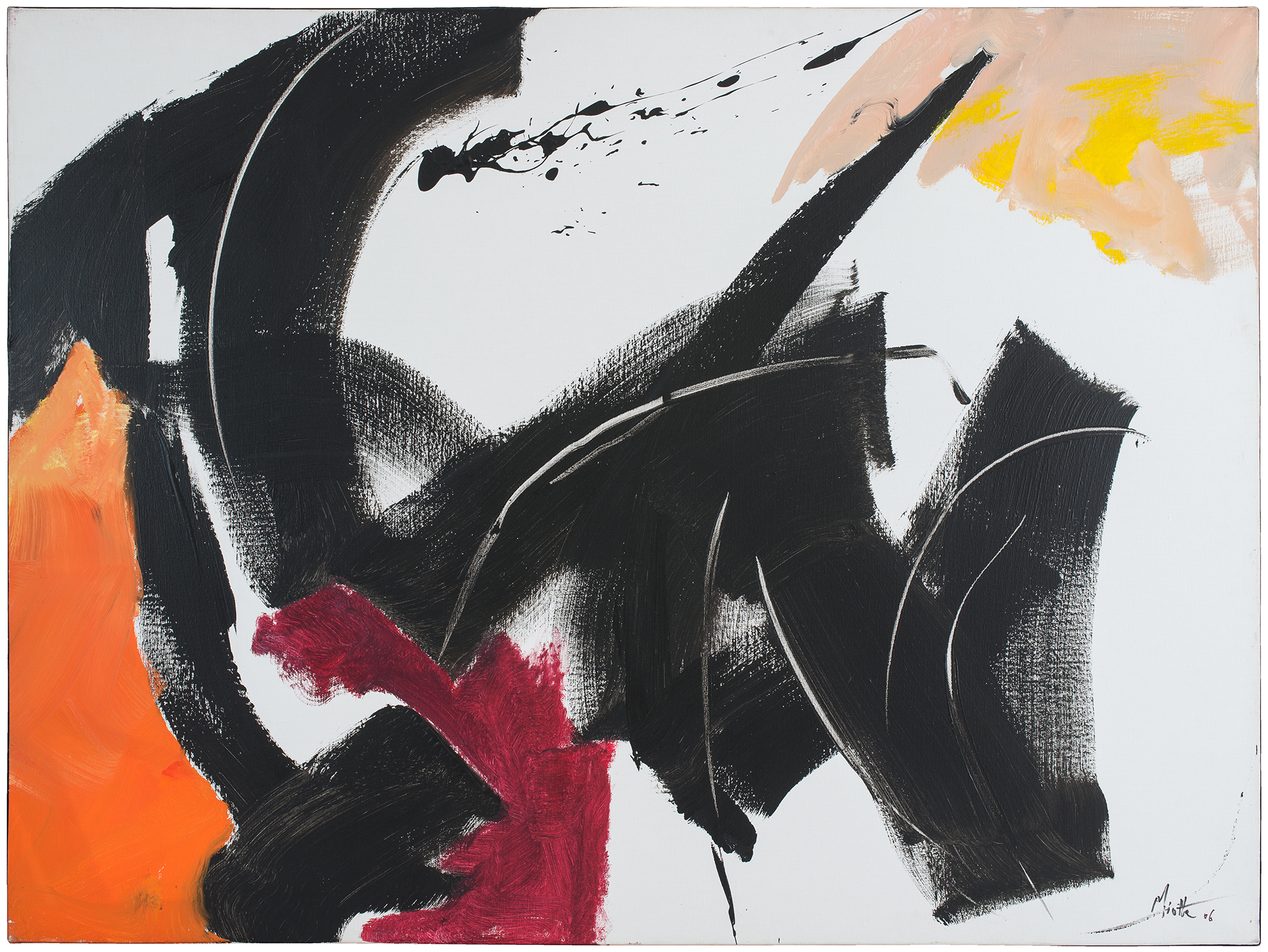 Known for his free and spontaneous gestural expression, the painter Jean Miotte positioned this movement within a minimal space, which gave it even more strength and expressiveness. Whether in ink on paper or acrylic paint on canvas, the artist’s black brushwork assumes a monumental nature.