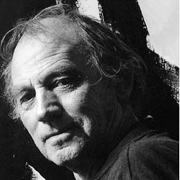 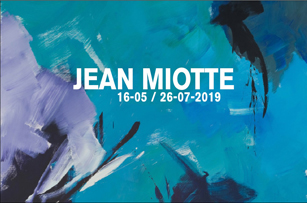 Jean Miotte (1926-2016) engaged in non-representational art from 1950, when gestural abstraction emerged on both sides of the Atlantic as a contemporary and relevant artistic language. He was recognized very early on as a major member of the “informal Art” group and also as being close to “Lyrical Abstraction”.

The term “Informal Art” (“Art Informel”) was invented by the French art critic Michel Tapié in 1951 to refer to a form of art said to be “formless”. The negation of traditional form, a radical break from the established notions of order and composition, naturally found their place in the Post-war European cultural environment.

Jean Miotte developed an audacious calligraphic vocabulary; leaps, liquid jets and arcs of painting evoking the body in motion while at the same time negating corporality.

For Jean Miotte, the aspiration of this abstract gestural language to create a bridge between cultures, going beyond the geographical and national barriers to form a truly universal language, was of paramount importance.

Fundamental opposition of colours, clarity of line, and energy of visual description, transparency and lightness are the marks of his work.