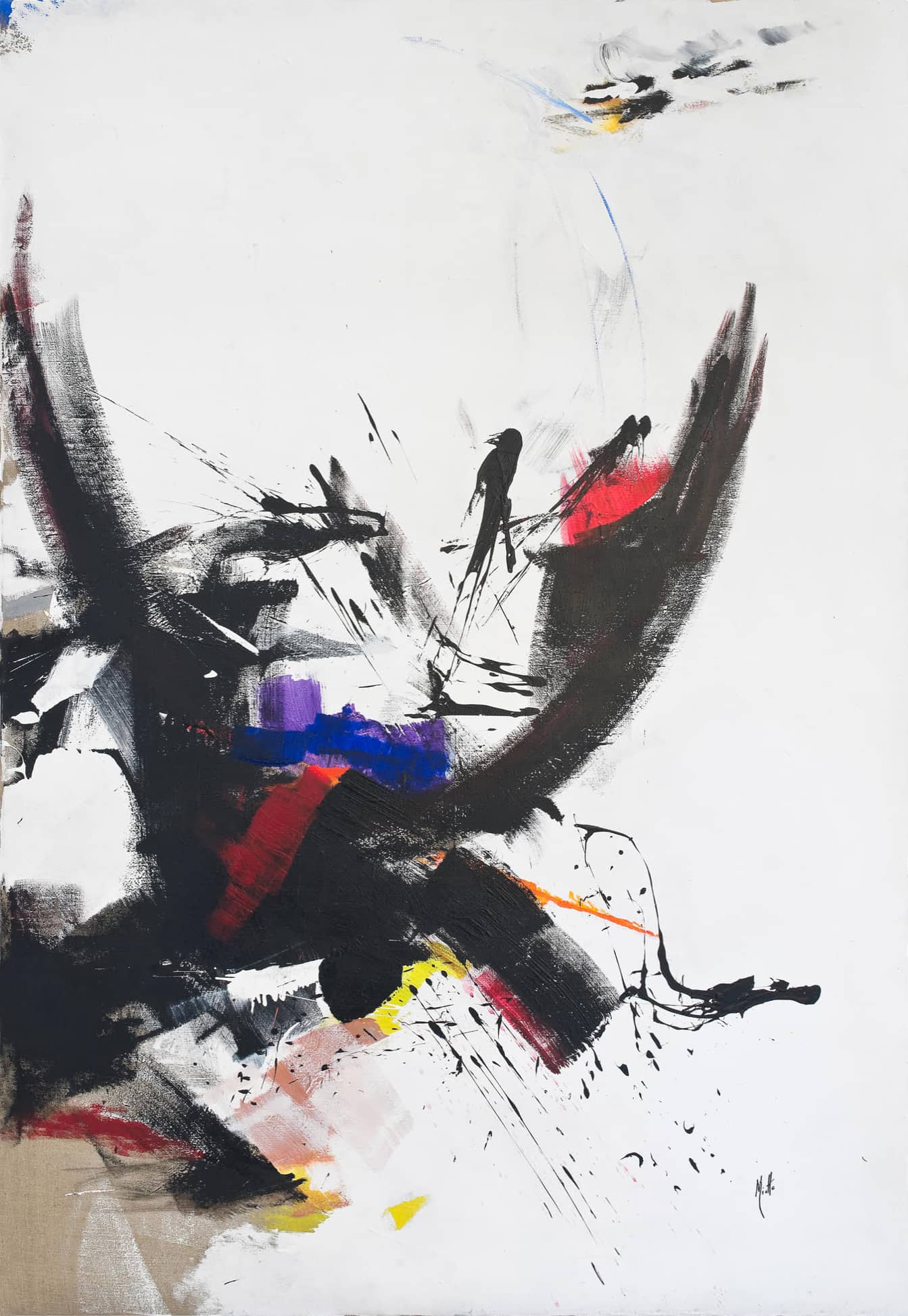 Jean Miotte is a French painter whose personal version of abstraction places him at the limit between Informal Art, Tachisme and Lyrical Abstraction.

This artist was especially interested in the representation of movement in his art. This reoccupation is perfectly illustrated in the ainting presented here

Youth and Education of the Painter Jean Miotte

The painter Jean Miotte was born in Paris in 1926 and spent his youth in Occupied Paris : he was eighteen years old at the end of the war. “It was in this context of upheaval and planetary ideological turmoil that his desire for other values, other spiritual commitments was exacerbated. His hostility towards all forms of regimentation, group effects, dates from this time. At the age of nineteen, he had decided, his path would be solitary.”1

After studying mathematics, the artist painter Jean Miotte discovered painting during his military service in 1946. He painted the walls of the barracks and said : “I had been struck by the ugliness of the place and the surrounding wall decorations and I swore that as soon as I could I would transform it.”2

In 1947, to finish his training in art, Jean Miotte went to the studio of the Fauve painter Émile Othon Friesz, and then to Ossip Zadkine, the Cubist painter and sculptor.
Jean Miotte was also greatly impressed by Fernand Léger’s work. The Cubist artists in fact had an important influence. Just as his predecessors decomposed to recompose, Miotte “unmakes”. Jean Miotte, was “the orchestration of a world that explodes”3. The artist was at the time fascinated by the depiction of the body and learned to draw it while moving. 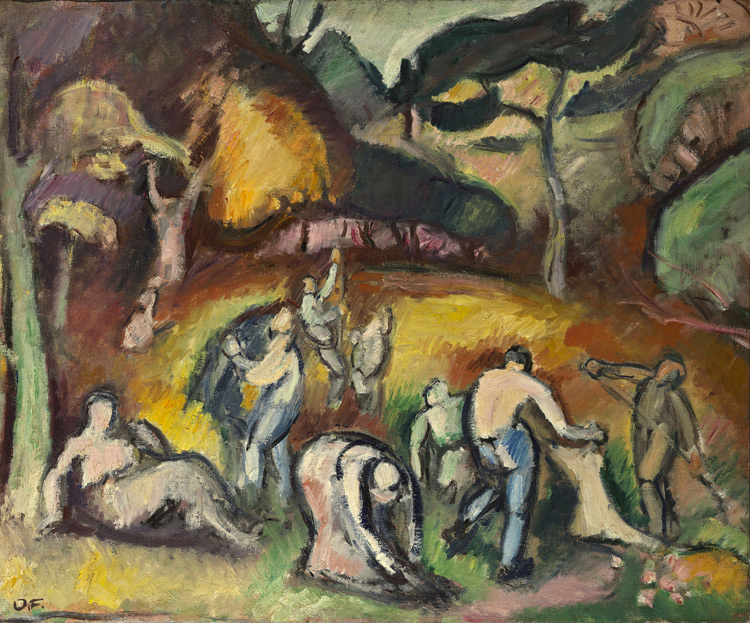 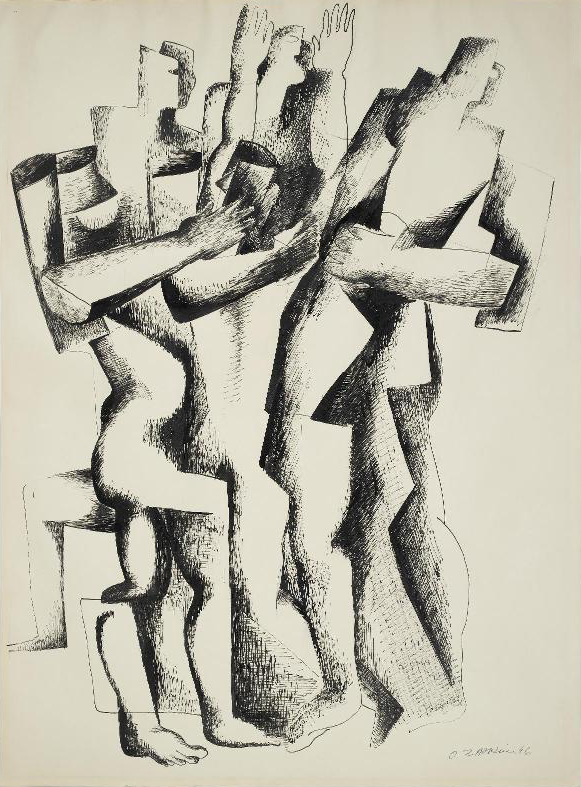 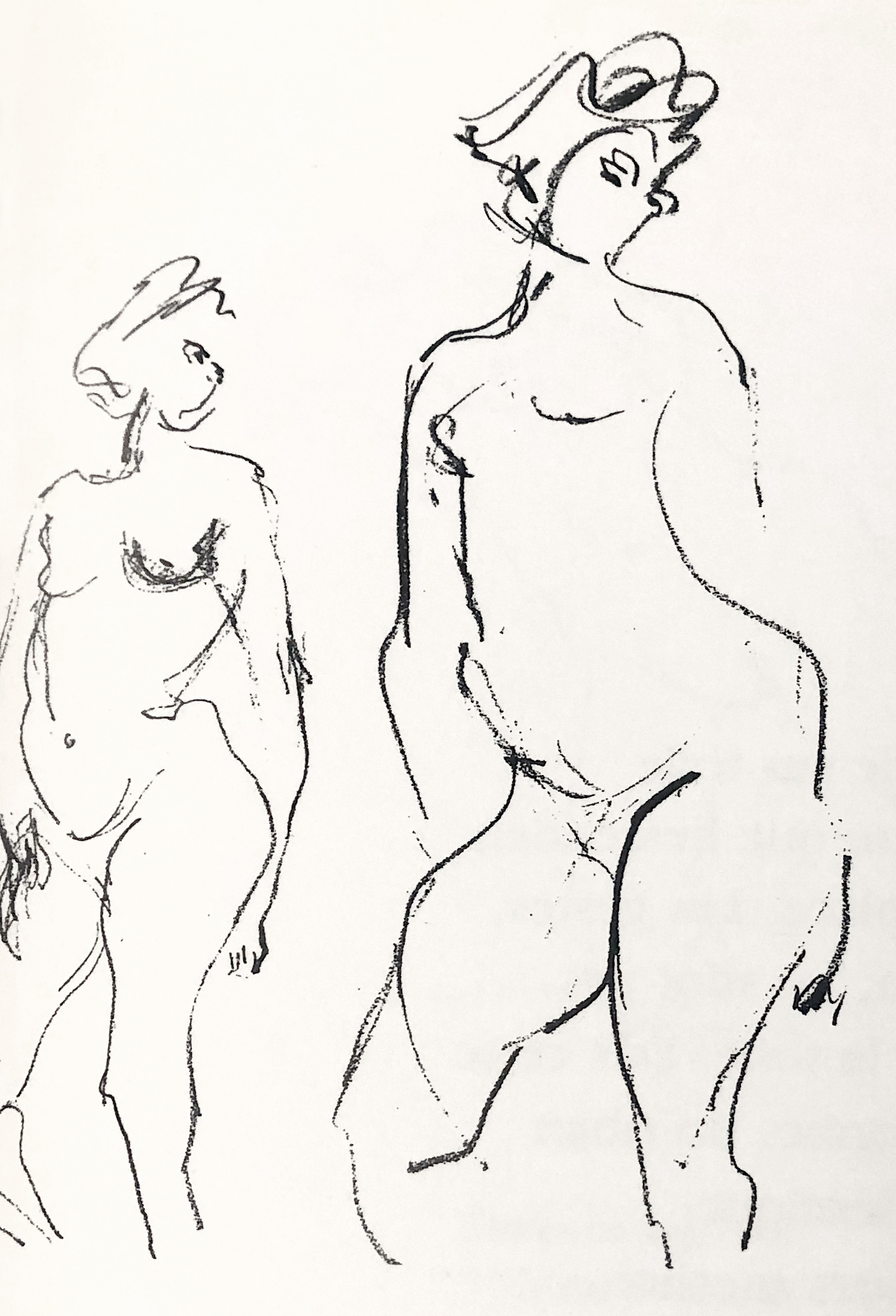 The Importance of Dance in Jean Miotte’s Art

Jean Miotte was surrounded by friends who were dancers and choreographers such as Zizi Jeanmaire and Wladimir Skouratoff. Skouratoff brought him to London to see performances of Colonel Basil’s ballet company.
The prima ballerina of the Ballets du Marquis de Cuevas, Rosella Hightower, invited Jean Miotte to Monte-Carlo where he designed theatre sets. For Jean Miotte : “Some
quite funny adventures started there, which began in the dance world. (…) I savoured the first marvels and discoveries of the choreographic world, the arabesque, the scenic organization of the line, the rhythm…” 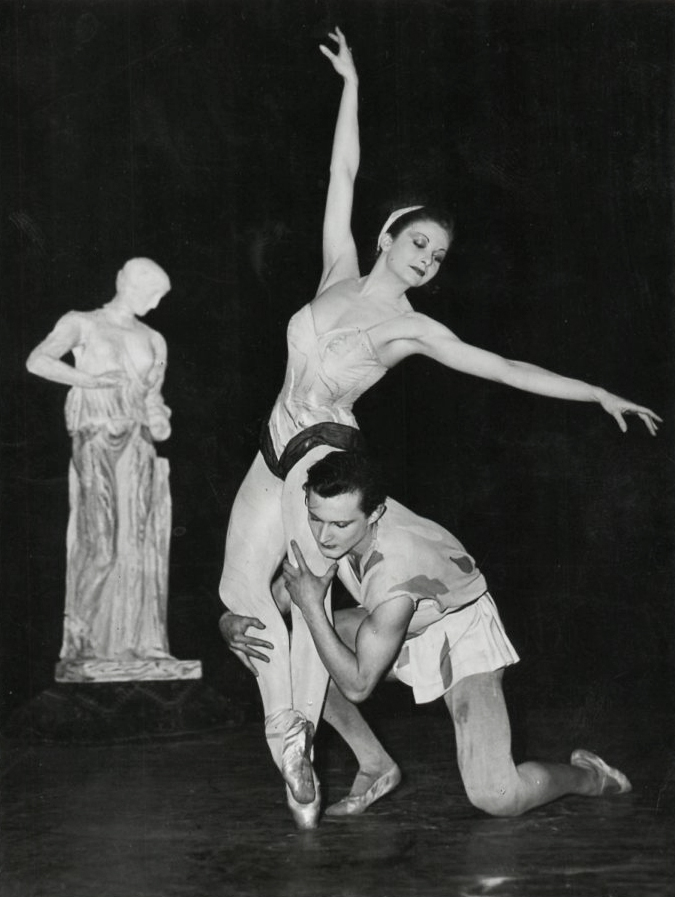 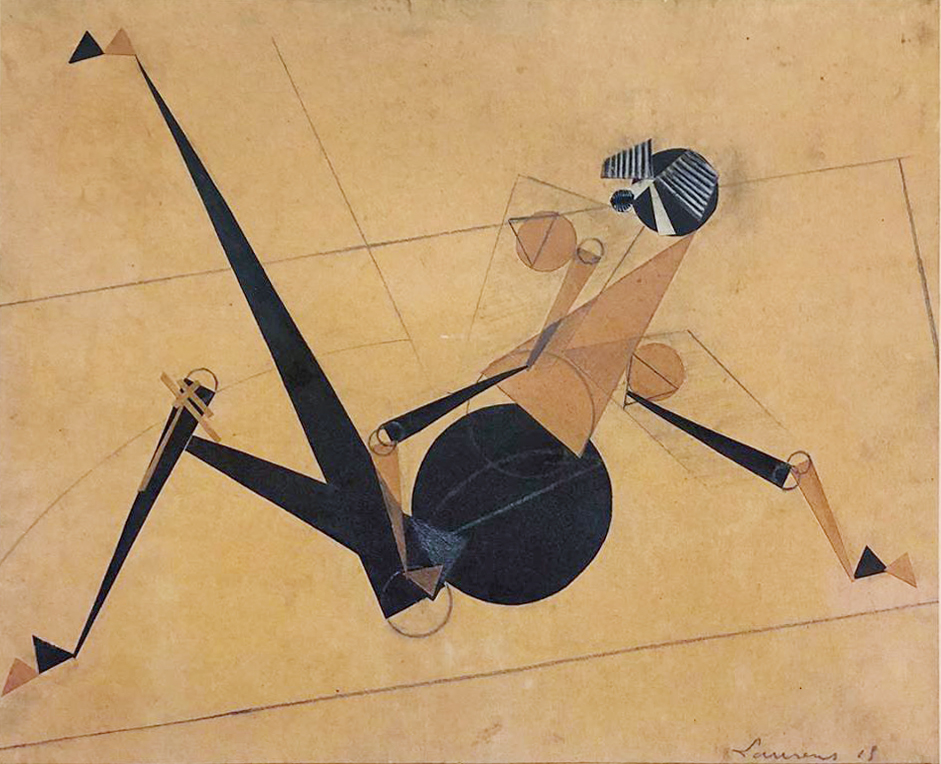 The painter Jean Miotte created his first abstract works around 1950.
Gradually, the figure was dissolved in the arabesque. The artist’s gesture was spontaneous, it was an improvised dance with the canvas. His painting was his gesture, the brush and palette knife tracing his movement. Painting and painter moved at the same speed like a reflection.
Jean Miotte was carried by “something sacred in the energy of life”.4 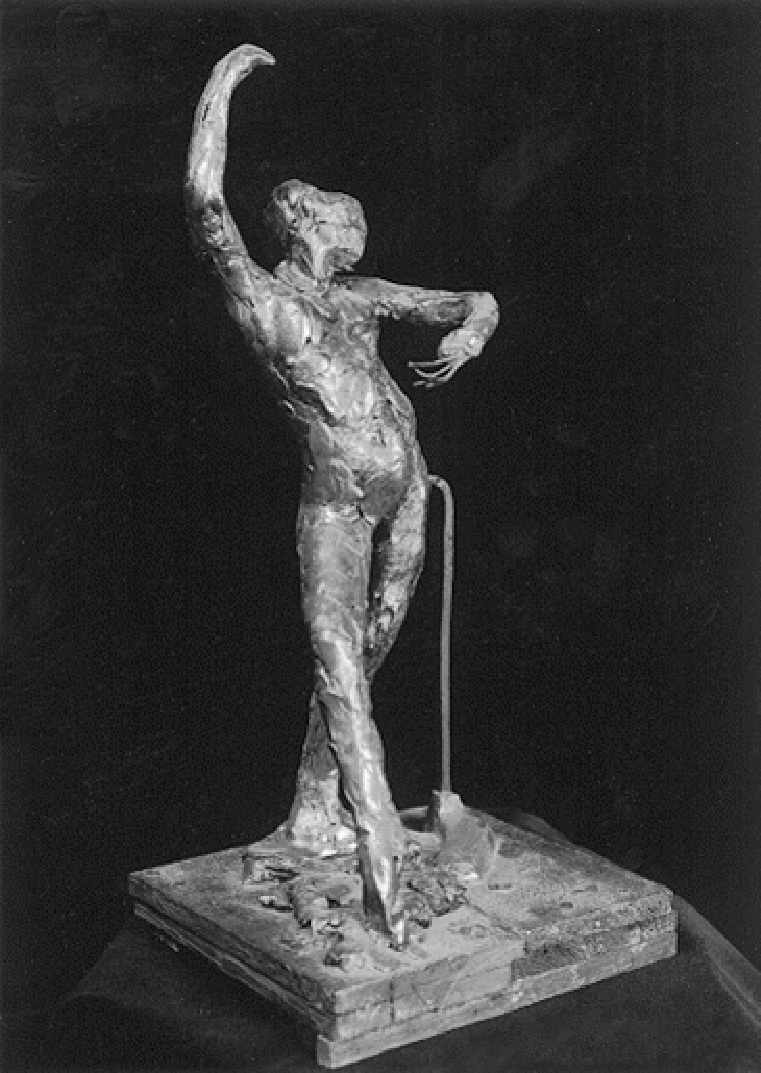 The artist Jean Miotte’s painting was nurtured by theatre and performance. The artist dreamed of a synthesis of music, painting and choreography, following on from Richard Wagner’s theories about the Gesamtkunstwerk or total work of art. This concept aims to associate several forms of art to fuse art and life together. Jean Miotte followed this idea perfectly in treating his biographical experiences as a spectator of ballet as if it were an art school. This was a creative visual experience, in the same way as passing through the studio of a great painter.
The critic Roger van Gindertaël referred to Jean Miotte’s painting as “of total harmonisation in the tension of life itself with all its complexities and contradictions.” 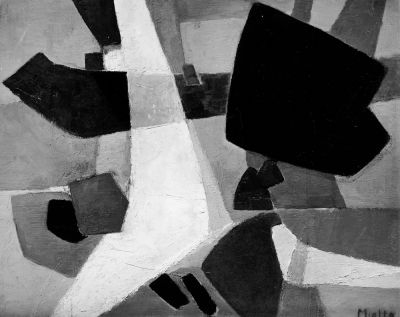 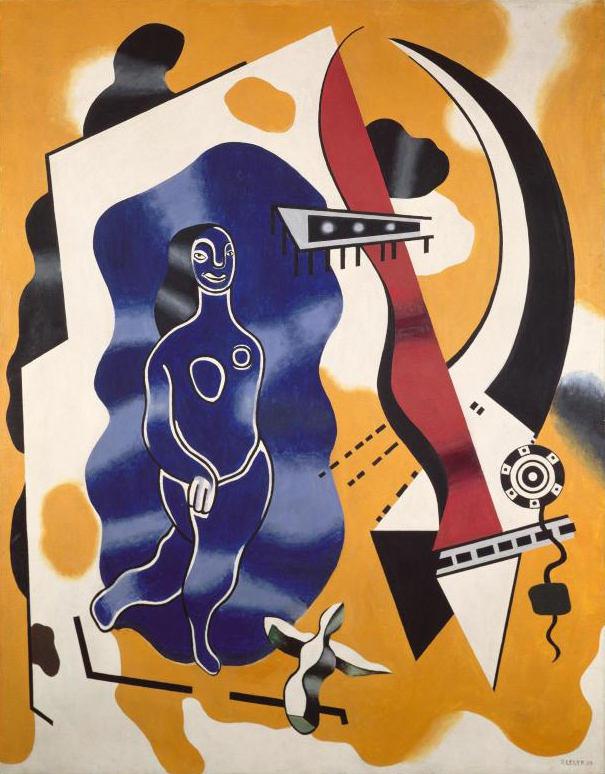 Richard Wagner’s ideas of the 19th century again became topical in the 20th due in part to the activities of the Black Mountain College. This independent experimental university was established in 1933 in North Carolina.
It prioritised avant-garde artistic practices. In 1952, John Cage organized an event there, identified as the first “happening” in the history of art. For 45 minutes, several different artistic activities happened freely and at the same time: David Tudor played the piano, Mary Caroline Richards and Charles Olson read poems, Robert Rauschenberg projected films on the ceiling, John Cage read a lecture and Merce Cunningham danced. This event happened in a décor comprised of white monochromes by Robert Rauschenberg and a black and white abstract painting by Franz Kline.

The painter Jean Miotte, who was sensitive to American culture, was fascinated by these concepts, bringing together art and life. Still in 1952, Jean Miotte met the American painter Sam Francis and visited his studio in Ville-d’Avray (France). The exhibition Cinquante Ans d’Art aux États- Unis (Fifthy years of Art in the US) was shown in 1955 at the Musée d’Art Moderne de Paris and then in 1959, the same museum organized the exhibition Jackson Pollock
et la nouvelle peinture américaine (Jackson Pollock and the new American painting).

In 1958, the dealer Jacques Dubourg gave Jean Miotte a contract at the same time as Jean-Paul Riopelle, Sam Francis and Joan Mitchell. In 1961, along with Sam Francis, Georges Mathieu and Jean-Paul Riopelle, Jean Miotte was included in the group exhibitions of the Galerie Swenska-Franska in Stockholm and the Galerie
Bonnier in Lausanne. That year, he was awarded the Ford Foundation Prize and was invited to spend six months in the USA. The following year, a solo show of his work was organized by the Iolas Gallery in New York. Jean Miotte met the American artists Robert Motherwell, Mark Rothko, Chaïm Jacob Lipchitz and Alexander Calder. He travelled around the USA and gave a lecture at Colorado Spring University.

In 1972, he again spent time in the USA, this time in New York and Washington. Forty-six of his canvases were exhibited at the International Monetary Fund in Washington.

In 1978, the painter Jean Miotte set up his studio in New York where he was represented by the Martha Jackson Gallery. The Guggenheim Museum acquired two of his works on
paper in 1987. The Jean Miotte Foundation opened in New York in 2002 with a permanent collection of his works. 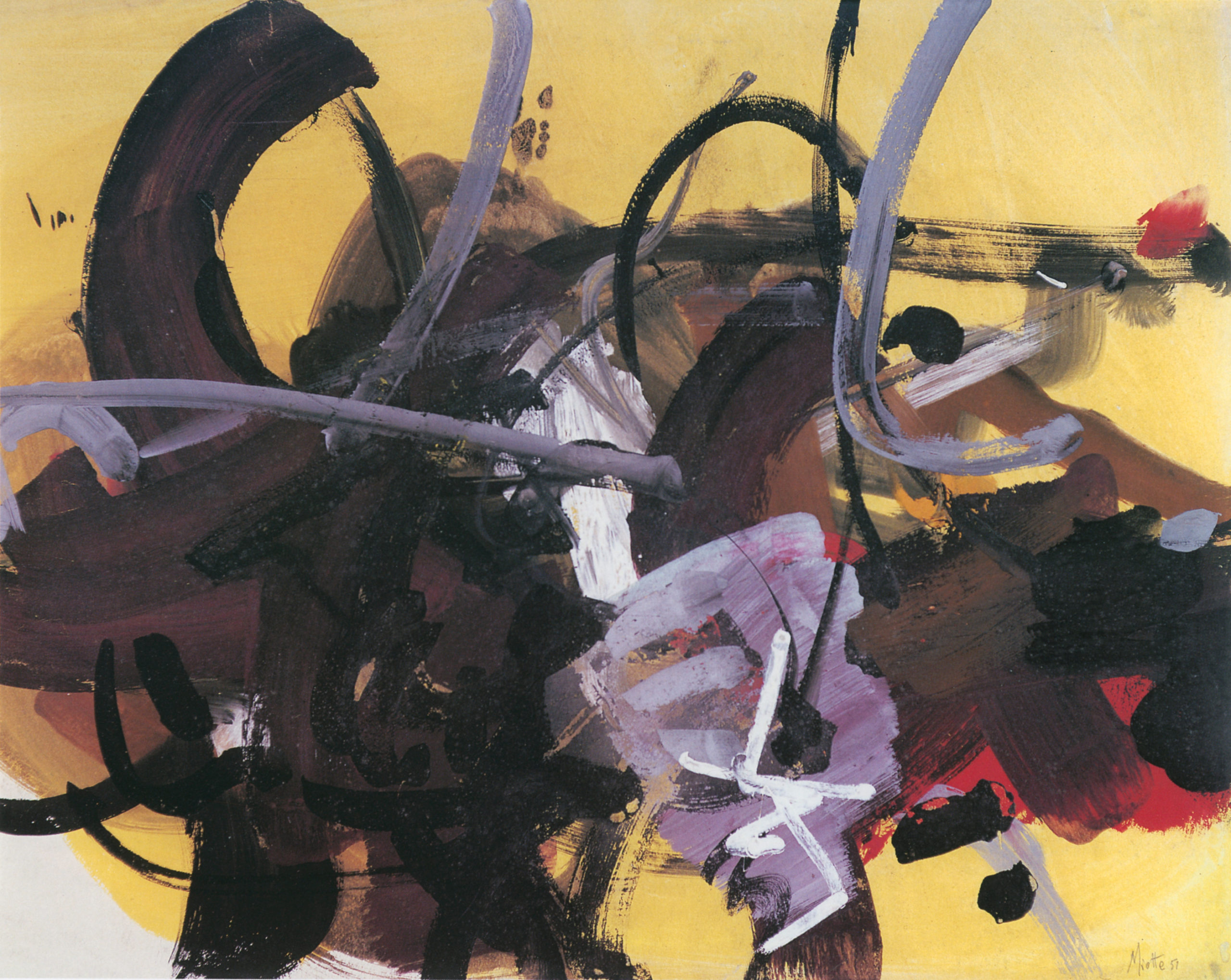 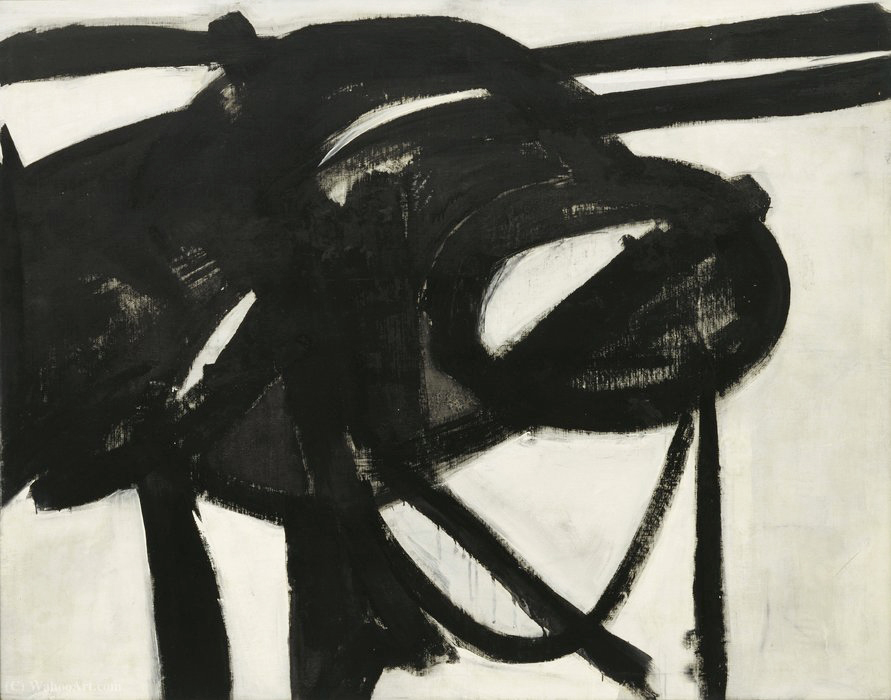 The painter Jean Miotte fit perfectly into the artistic context of the second half of the 20th century where movement became important in painting with Lyrical Abstraction, Action Painting, Kinetic Art, Abstract Expressionism, performance and so on. This interest was doubtless initiated by Marcel Duchamp with Anemic Cinema¸ an experimental film from 1926 in which optical disks whirl for seven minutes. 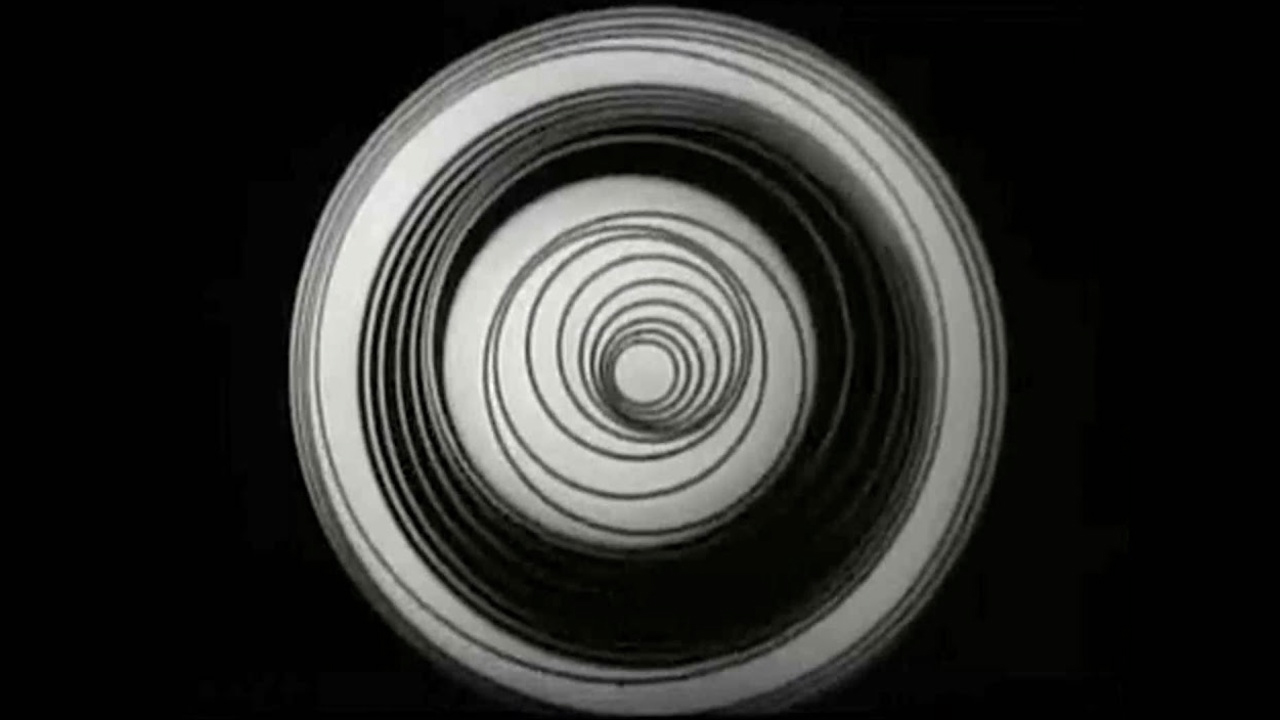 Jean Miotte’s paintings were created with an immediate gesture, a dazzling motion. “Movement is my life” he recalled. In this, he can be compared to Jackson Pollock.
The artiste Jean Miotte never prepared his work with sketches. The American art critic Harold Rosenberg appreciated this practice especially : “the most important thing in art is
freshness”.

This free and instinctive form of painting was also influenced by Surrealism. The spirit was liberated of all constraints of reflection : “it is the intuition that counts above all when a work is born”. Jean Miotte evoked his work as the “result of internal conflicts, my painting is a projection; a succession of acute moments where
creation happens in full spiritual tension. Painting is not a speculation of the mind or the intellect, it is a gesture that is carried within.” Jean Miotte met Roberto Matta who told him : “Surrealism is for me a battle. (…) You too, you are a fighter, you are like me, your paintings are not abstract.” Surrealism also played a fundamental role in the development of American Abstract Expressionism, in particular due to the presence in the USA of Roberto Matta and Marcel Duchamp.

Jean Miotte received a commission from the city of Paris : a large format work titled Sud which hangs in the main hall of the Bastille Opera House. The writer Castor Seibel wrote about Jean Miotte’s painting : “Beyond all realistic figuration, it is an event in itself that finds its expression in the gestural dynamic and its equivalence in colour… knowing how to combine the contradictory in the form seems possible for Miotte, serenity battles chaos, gentleness and the savage rub shoulders in happiness.” 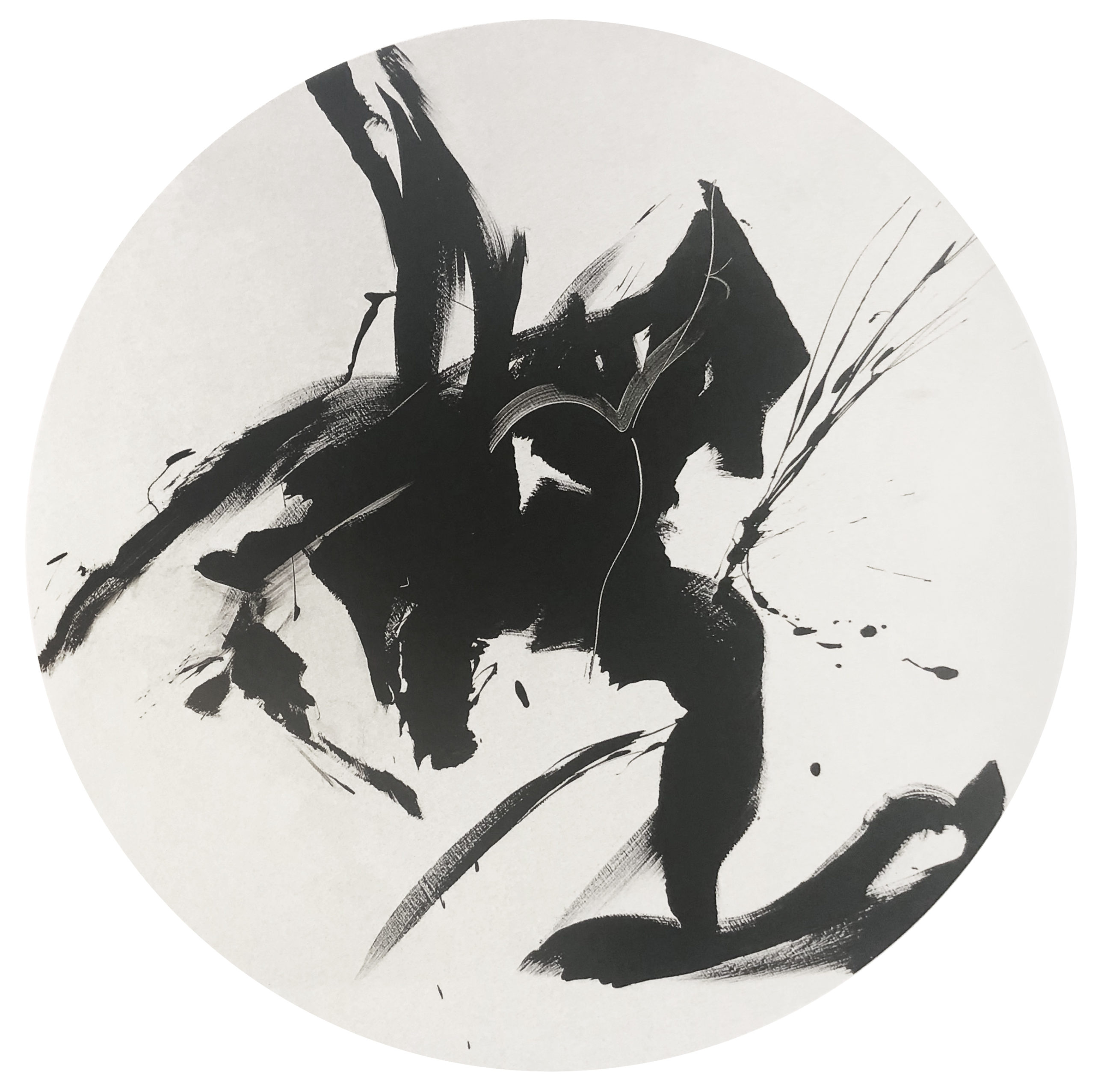 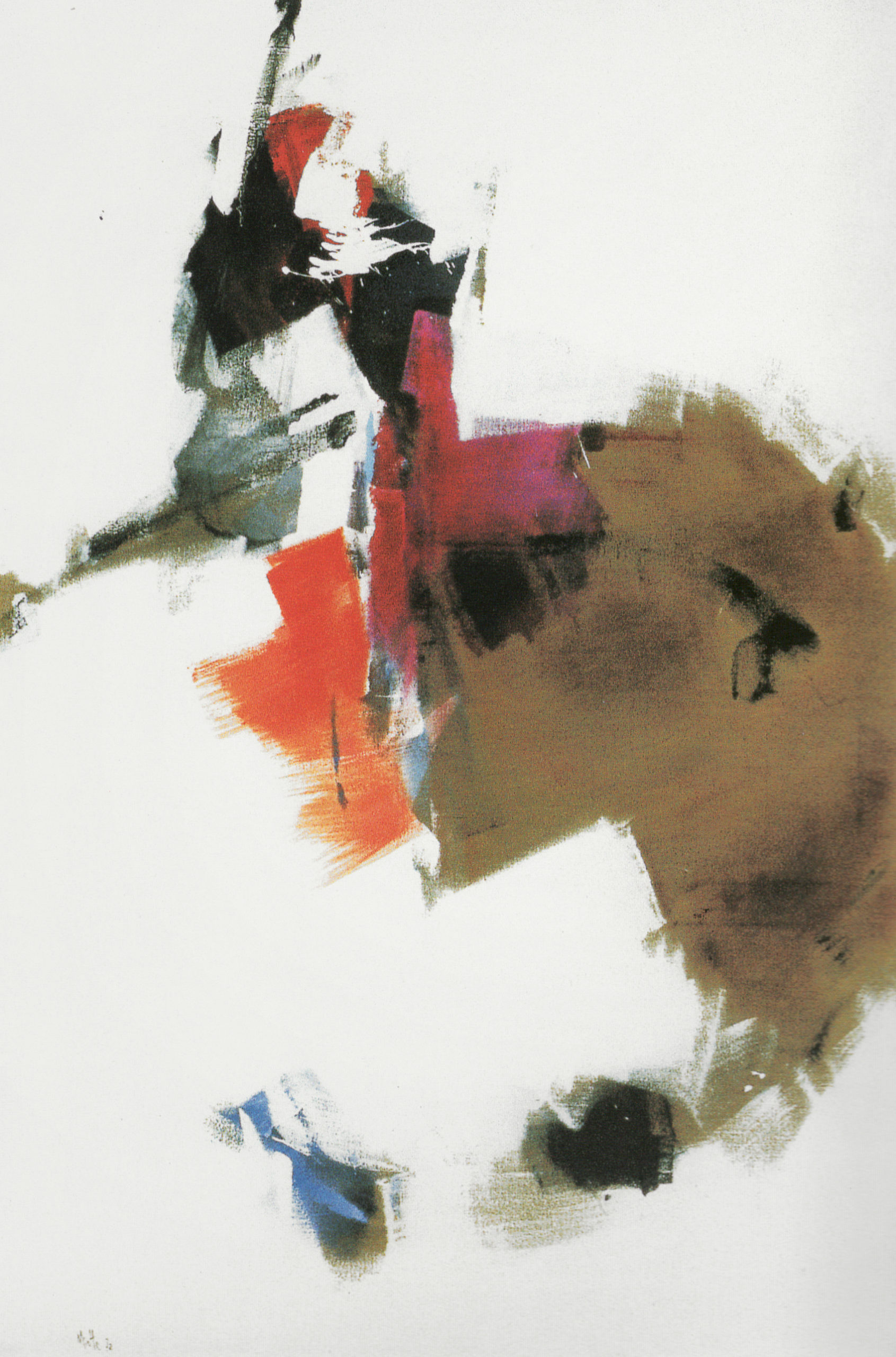 The painter Jean Miotte is fundamentally a man of his time for his artistic priorities based on movement, at a time when performance became a new medium of creation. The movement of the painter, his tools, his subjects, spectators and even artworks became an essential element in the art of the second half of the 20th century.

The painting presented at the Gallery is a perfect example of this: the wide black brush has inscribed the artist’s vehement gesture on the canvas. The hessian canvas left bare in a corner emphasizes this feeling of rapid execution and the projections of paint energize the composition. Jean Miotte here offers us the visual representation of a creative flight.