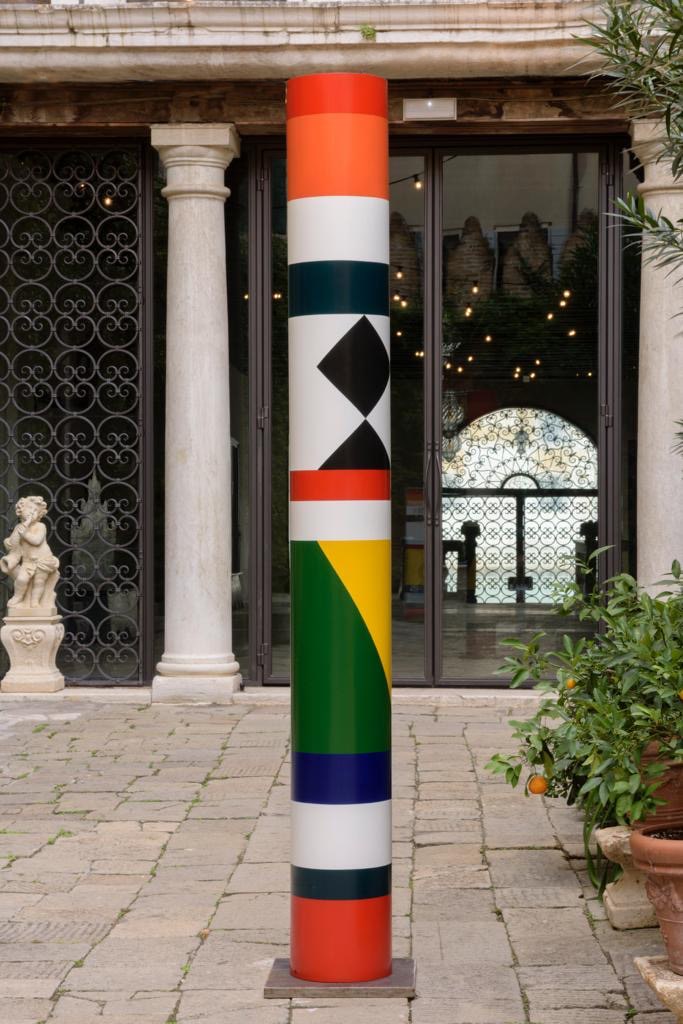 A multidisciplinary artist, the painter Guy de Rougemont is primarily a painter, an unclassifiable painter. His colourful and playful art is at the border between Pop Art and Minimalism.
Advocating the  decompartmentalization of art, he draws inspiration from his painting to explore space and to create environments, sculptures, decorative arts, artist furniture…

The Years of Education and Time in New York: Encounter with Pop Art & Minimalism

The artist painter Guy de Rougemont was born in Paris in 1935. He attended the École Supérieure des Arts Décoratifs of Paris from 1954 to 1958 where he was a pupil of Marcel Gromaire. With this post-Cubist artist, Rougemont learned at this early stage that “every straight line must be compensated for by a curve and vice-versa” (Jérôme Bindé).

As a holder of a state grant, he went to study at the Casa de Velázquez in Madrid and stayed from 1962 to 1964. He continued his training there, soaking up the “curvilinear baroque” (Dominique Le Buhan), and built up his repertoire of future shapes.

His first solo exhibition was in New York, at the D’Arcy Galleries, in 1962. Rougemont spent a year in New York between 1965 and 1966. He met Andy Warhol and Robert Indiana there. It was through contact with American artists and Minimalism that Guy de Rougemont opened up to large format acrylic painting, appreciating the strength of simplified, pared down forms and the power
of colour applied in large flat areas.

In Search of a Shape, the Ellipse

In 1967, the painter Guy de Rougemont started to work with the ellipse, the first geometrical shape to obsess him. He experimented with this elongated circle using vinyl paint on the flat surface of the canvas left untouched in some areas, like the bare skin of the support.

Renaud Faroux wrote that “Guy de Rougemont has invented a universe made of cylindrical forms, ellipses, totems, serpentine lines that provide a colourful
symbiosis between Minimalism and Pop Art”.

Then one form fed another, Rougemont passed from the ellipse to the cylinder.
Bernard Chapuis explained: “Rougemont has ventured so far into the peaceful or provocative curves of ellipses, to their most allusive hollows, that he had a feeling of being encircled by them (…). Pushed to its final entrenchments, the ellipse threatened to abandon itself to baroquism, to become unnecessarily complicated. The move to the cylinder marks less a change of direction than a change of state.”

From the Ellipse to the Cylinder

From 1971, the cylinder became the haunting figure in Rougemont’s work. This round and elongated body, which combines circle and line, became both the new favoured form of his polychrome volumes and his new support for placing colours in space.

The artist confirmed this himself: “The tube came in 1970. Until then my repertoire of shapes was based on the ellipse. The tube is the cylinder – circular in the plane, rectilinear in the elevation – the curve and the straight line are found there fundamentally, and reflections on a cylinder can be elliptical.” The cylinder according to Rougemont, is the magnified version of the industrial tube, the pole, a new reflex in architecture as well. 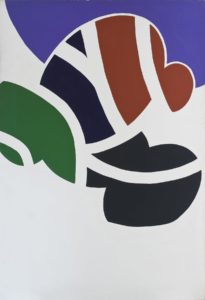 The cylinder is the Doric column according to Rougemont, refined as much as possible. It is also the totem of modern times, the emblem of traditional societies made modern.

From then on, the cylinder, which became column, totem, inhabited both public and private spaces. Very quickly it was an emblematic form at the heart of the painter Guy de Rougemont’s art.

The Cylinder in Urban Landscapes

Set up alone in the urban landscape, like the Totem planted on Albert Thomas square in Villeurbanne (1981), or conceived in a group of sculptures, like the forests of monumental cylinders raised at the Musée de Sculpture en plein air of the Ville de Paris, Saint-Bernard bank, (Interpénétration de Deux Espaces (Interpenetration of Two Spaces), 1975), the cylinder is decorated with rings and multi-coloured geometrical shapes to sport the artist’s palette for a “sublimation of colour” (Rougemont). 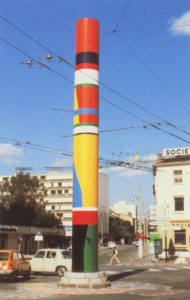 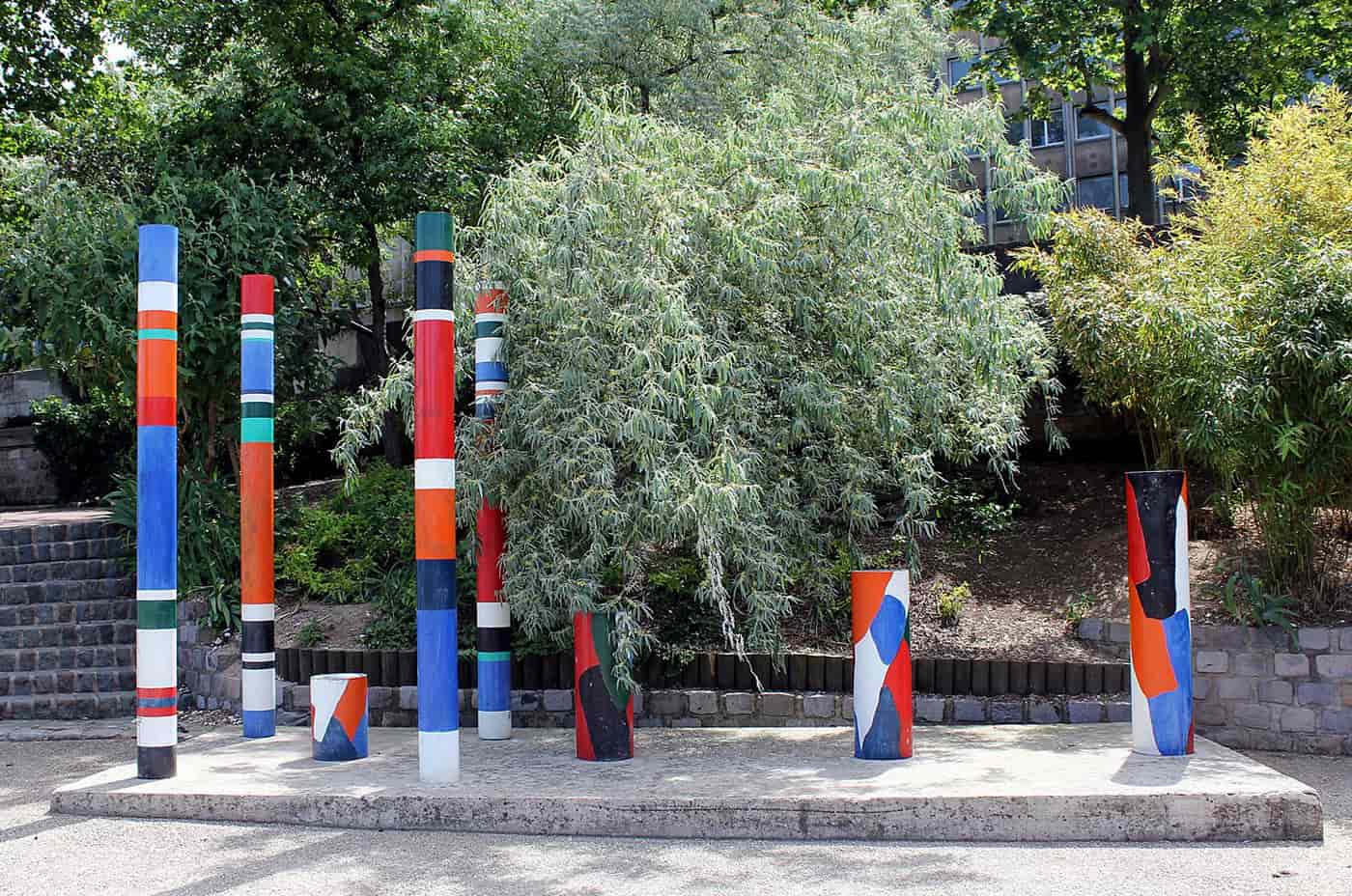 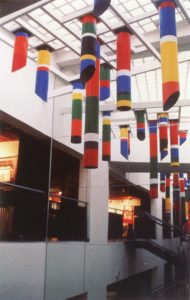 As a “playful geometer” to use his own words, Rougemont has played with the cylinder’s shape. In Lisbon at the Franco-Portuguese cultural centre, he created a suspended sculpture made of columns hung from the ceiling (Cylindres stalactites, 1985). In Belfort, a municipal fountain presents a forest of cylinders made of marble (1986). In Châteauroux, the cylinders give rhythm to the space at République square(2000). 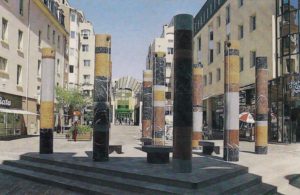 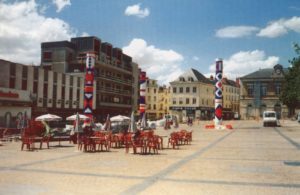 The Cylinder in Rougemont’s Artistic Environments

The painter Guy de Rougemont enjoys laying out his artistic universe in environments that he creates as a reflection of the forms and colours that inhabit him. His commissions, private and public allowed him to decompartmentalize the artistic disciplines, something he had wanted so much, allowing Rougemont to marry artistic creation and architecture, artistic creation and urbanism. In Paris, in the entrance hall of the new Saint-Louis hospital, the cylinders are grouped in twos and threes “recalling Yose- Uye,” noted Bernard Chapuis, “a forestry style in which masters of bonsai practice grouped planting” (1985).

For Rougemont, art is for everyone and should be made accessible to all. Art has become democratic and has reached peripheral urban areas, such as the Arlequin quarter, La Villeneuve Échirolles (1974), where the monumental sculpture comprises a forest of cylinders, which has become emblematic of this Grenoble area in south east of France. 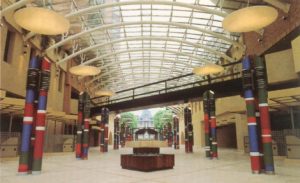 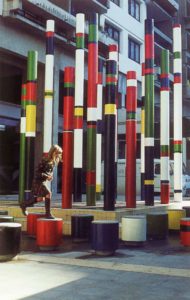 The cylinder is also at the heart of the Environnement pour une Autoroute (Environment for a Motorway) a flagship project for Rougemont that is also highly original. Along the shoulders of a 30 km section of the A4 motorway, the Autoroute de l’Est in France, a whole series of polychrome sculptures by the artist creates a rhythm with spheres, cubes, geometric slabs in the artist’s colours. 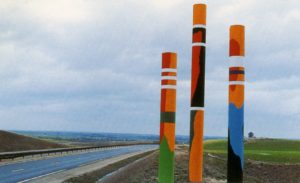 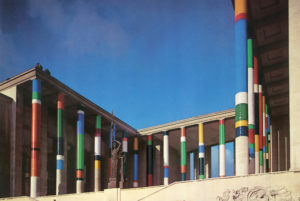 The project for the Mise en Couleurs du Musée d’Art Moderne de Paris (Colouring the Portico of the Musée d’Art Moderne de Paris) in 1974 was for the artist Guy de Rougemont the perfect implementation of his experiments with the cylinder. He covered all 20 columns of the museum’s peristyle with coloured sheaths. But this covering didn’t refute the original structure. On the contrary, because the coloured covers didn’t hug the entire shafts, they allowed the building’s skin, its stone sheath, to be glimpsed.

In the heart of the French capital and on the threshold of a museum, these coloured poles became Rougemont’s standard for a short period of time.

In 1975, the Musée d’Art Moderne de Paris bought the group of sculptures Huit Grands Tubes sur Socle ( Eight Tall Tubes on a Base) from the artist. 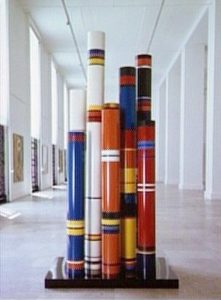 The Cylinder beyond France’s Borders

Beyond the urban space, the painter Rougemont’s cylinders crossed France’s borders and melted into the landscape itself from one end to the other of the planet: from the Open Air Museum in Hakone, Japan (1983) to the Quito Metropolitan Park in Ecuador (1998). 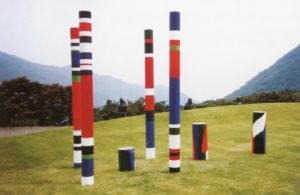 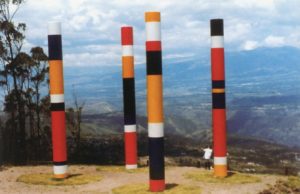 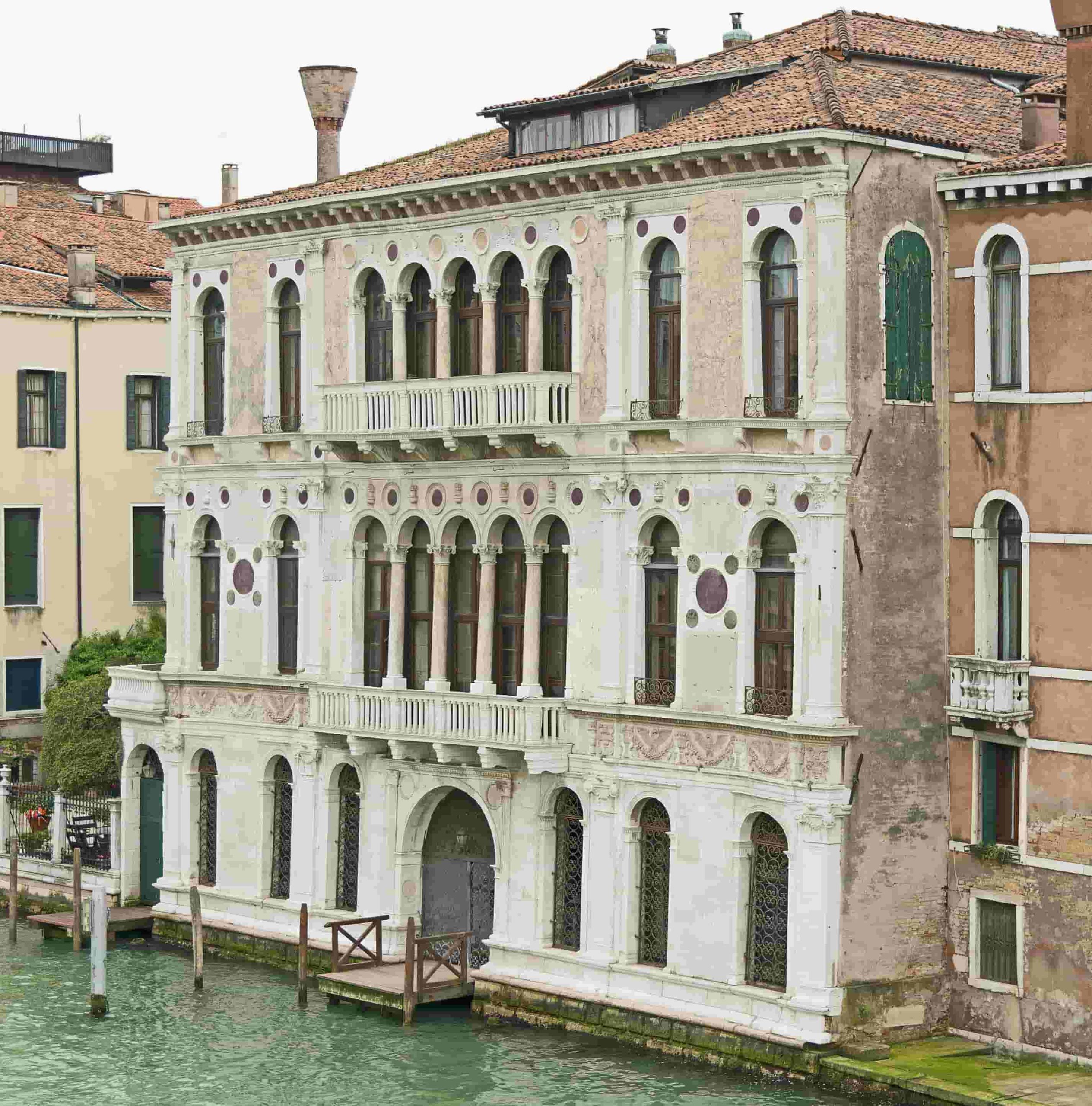 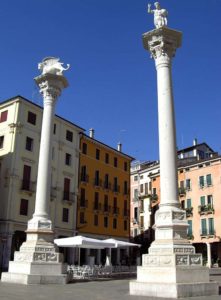 Columns of the Piazzetta, San Marco and San Teodoro, Venice

A Totem in Venice: The cylinder at the centre of Rougemont’s work

More recently, the painter Guy de Rougemont has returned to the idea of the cylinder and designed a new Totem for the 58th Venice Biennale. Produced in an edition by Diane de Polignac Gallery, this Totem was displayed in the internal courtyard of the palazzo Contarini-Polignac in October 2019.

Nothing is less surprising than that the artist should have been inspired by this famous Venetian palace, a place of culture and encounters, to choose the colour scheme of his work. Adrien Goetz rightly commented: “the palace’s façade where he has worked is one of the large coloured surfaces and one of the most magnificently faded of the Grand Canal, with its marbles and bricks, its tile roof, its porphyry cabochon. Rougemont hasn’t echoed this, but has chosen red and orange for the upper section of the totem, dark triangles and lozenges against a white background for the middle section, the green and yellow movement of the piles give rhythm to the canal for the base.”

Totem 2019 is strongly connected to the Venetian setting for which it was conceived. In this upright column there is a clear echo of the stilts that are so emblematic of the Serenissima, and of the two Columns of the Piazzetta, San Marco and San Teodoro.

Could this be the third lost column of the Venetians as Adrien Goetz imagined? “When the two most famous columns in the world, those of San Teodoro killing his dragon in the form of a crocodile and San Marco’s lion arrived in Venice in  1172, the legend of a third monument, a marble column that disappeared, appeared very quickly. Here it has been recovered, this ‘column of the doge‘ hidden by Guy de Rougemont in the centre of this building that seems – with a mirror effect – to have been built around it.”

There is also a wink at Harlequin in the colour scheme of this colourful Totem and in its varied shapes: black lozenges against a white background, coloured rings. The emblematic character in the Commedia dell’arte is easily recognizable by his costume of multi-coloured triangles. 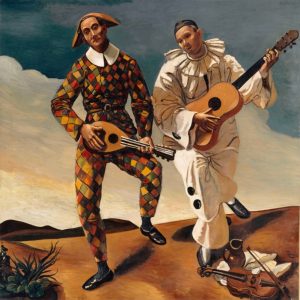 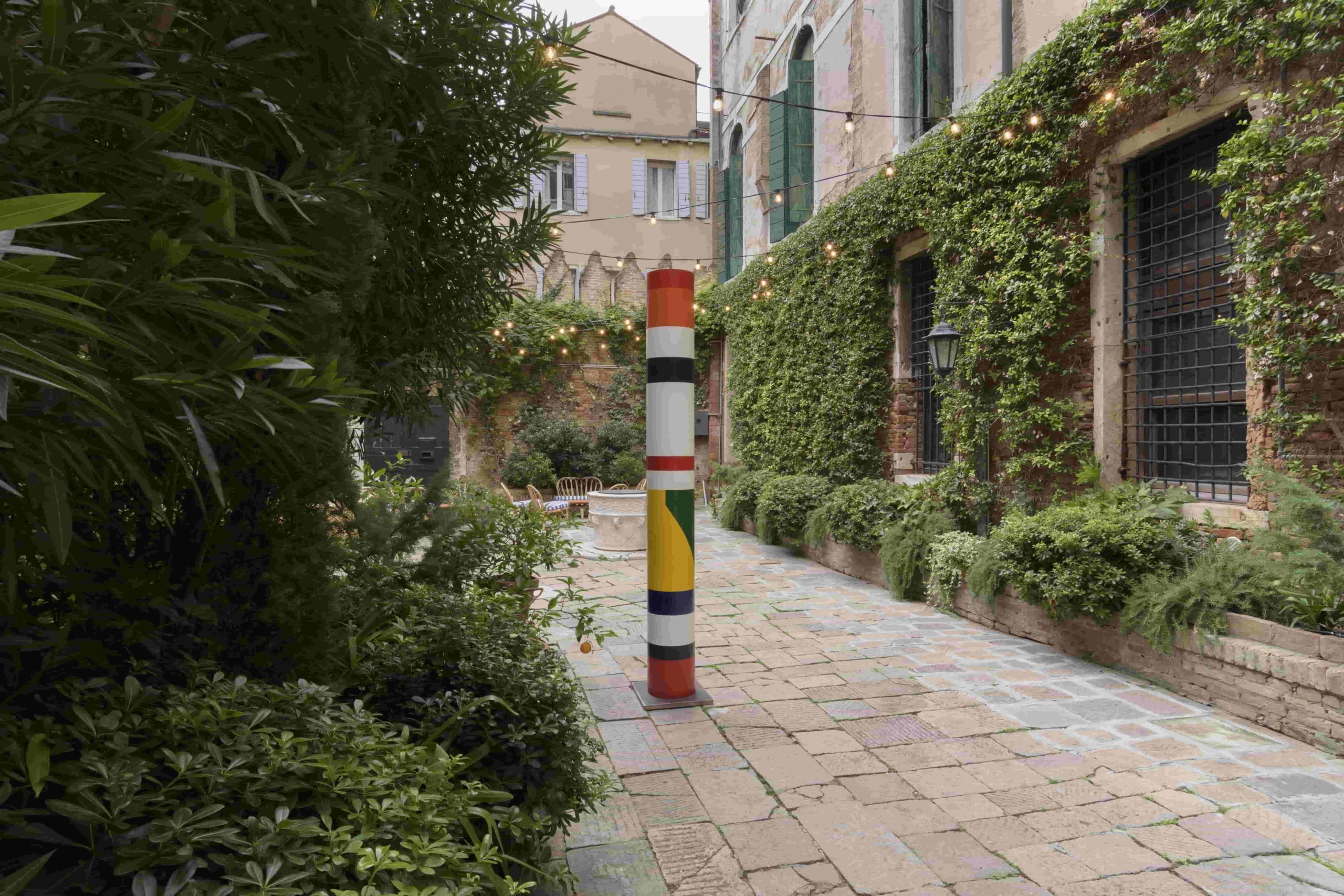